Having been considered a pariah for almost three decades, would now be the time to ask whether the Jaguar XJ40 may actually be the last thoroughbred cat from Coventry?

It's not unusual for automobiles to take a detour on their way towards classic status. Image may change, so too public perception, which, in certain instances, has even resulted in some cars gaining a cult following because of their lack of success.

The Jaguar XJ40 eschews all those regular patterns, however. Hailed as an all-conquering saviour at first, it quickly turned into a black sheep, before its status as unmitigated laughing stock was ultimately cemented. If an XJ40 turned up in any tv show, it was bound to end up either in flames, drowned in some river or as a scrap heap. In the real world, the XJ40 meanwhile acted as subterranean entry to the former automotive upper classes. To tweed-wearing Jaguar connoisseurs, this obviously relegated the ’40 to the status of an unwelcome blot on the otherwise thoroughbred bloodline of the XJ saloon range. Alongside its immediate predecessor, the almost universally loved Series III XJ, and its successor, the blatantly Series III-inspired X300 generation, XJ40 would appear to be a bit of an embarrassment for years to come.

But the passage of time alters many things, not least one’s perception. In the XJ40’s case, a car that but a decade ago came across as dull and lacking in finesse, has suddenly emerged as delightfully clean and almost perfect in terms of stance and proportions. Defining the appearance our current streetscape with their excessive creases and bulges, the XJ40 places modern automobile design in sharp relief, as though it was aware of the purity of its silhouette and excellence of its proportions.

Even next to its far more popular X300 successor, the ’40 exhibits certain qualities that lend it a (literal) edge: for example its tighter overhangs, more pleasing details (such as the door handles and wing mirrors) and, above all, the absence of rubbing strips. Who’d have thunk?

However, having bestowed such belated praise, one caveat needs to be addressed. Unlike its progenitor, the Series I XJ, which not only clearly bears the signature of Jaguar founder and chief stylist, Sir William Lyons, but was acknowledged by the man himself as his finest work, XJ40 clearly isn’t the creation of an artist. To this day, there isn’t one single designer that is directly credited with its shape, although that isn’t due to the car being an embarrassment to its creators, but because its form had many fathers. 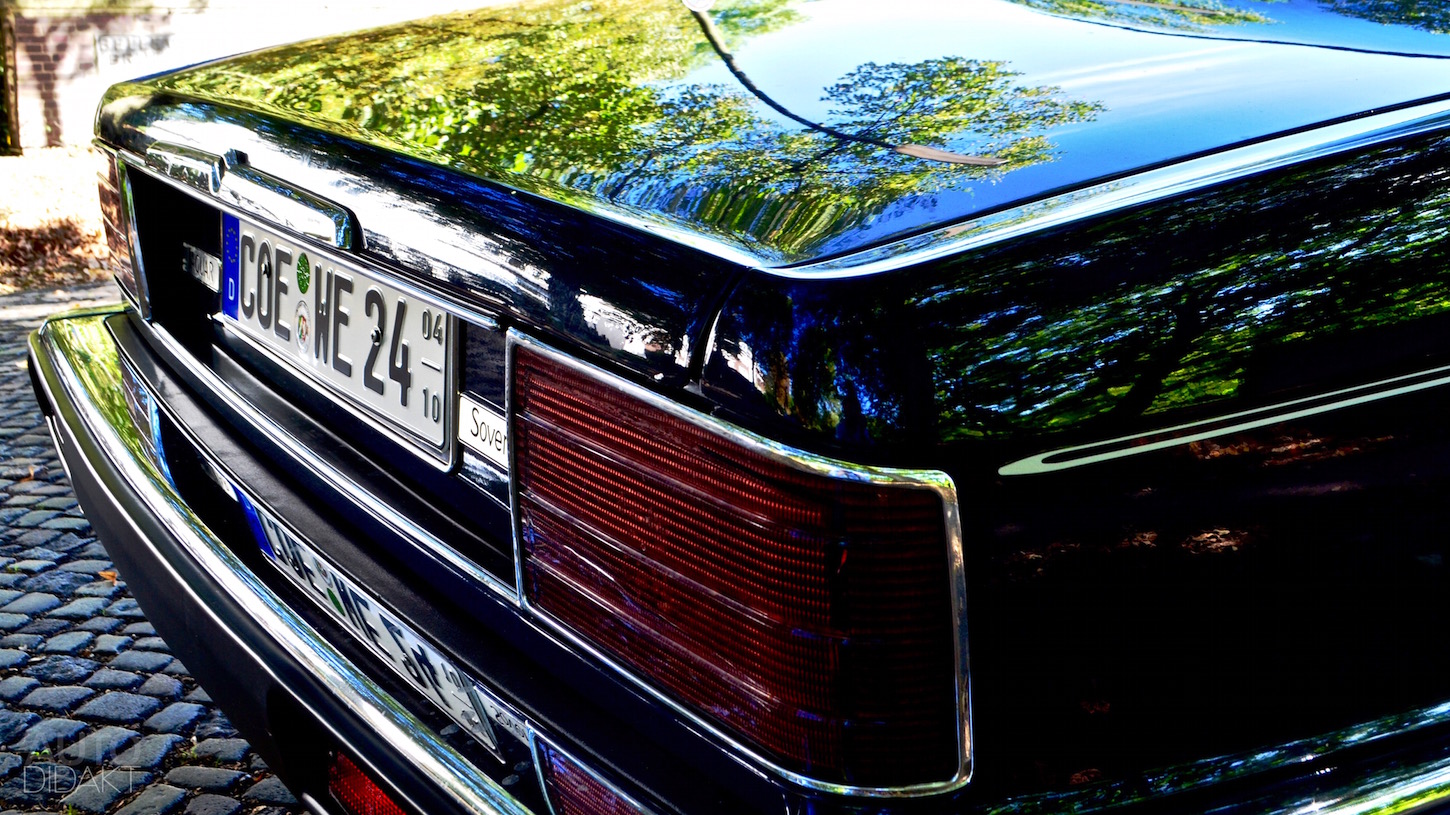 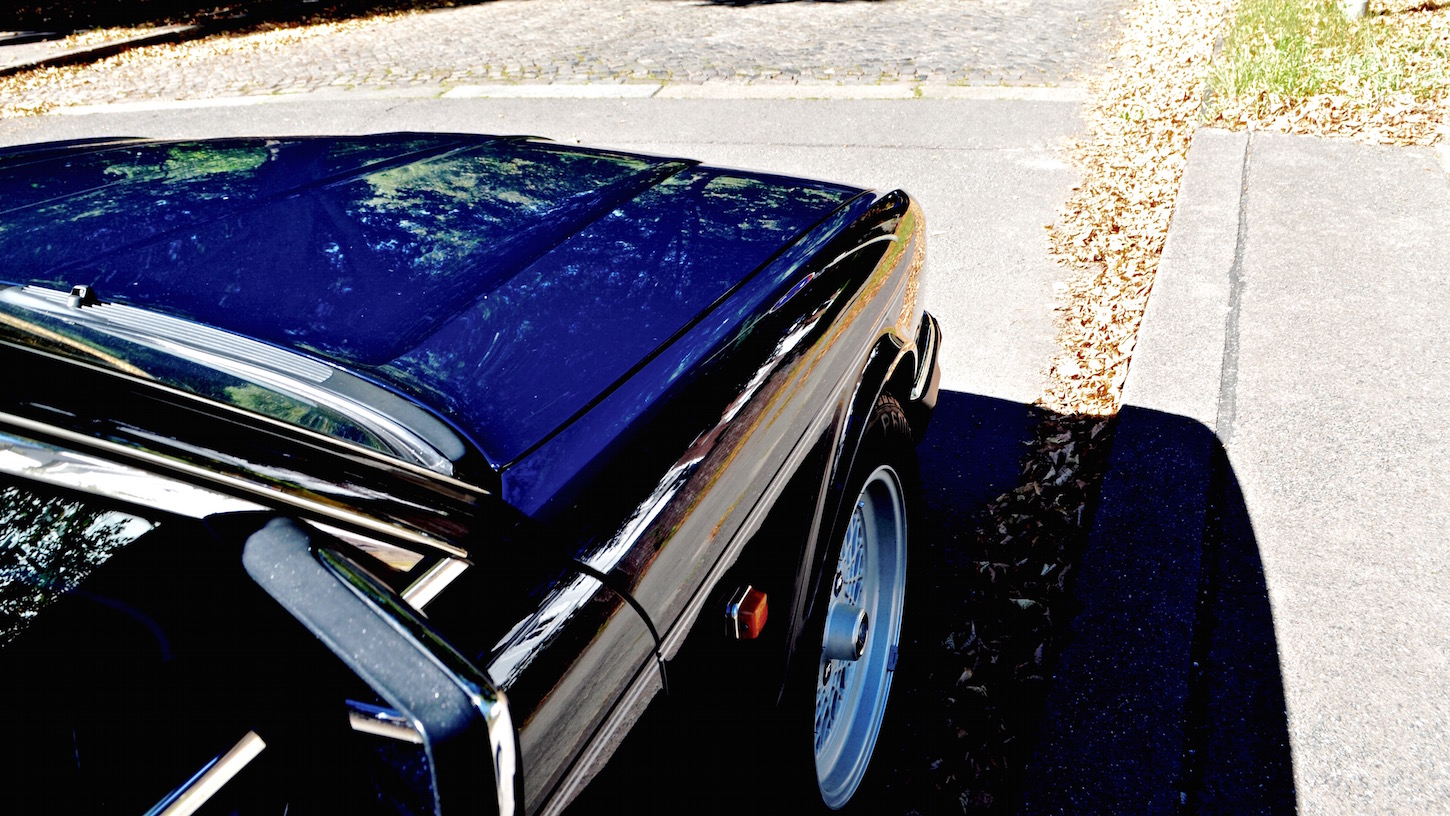 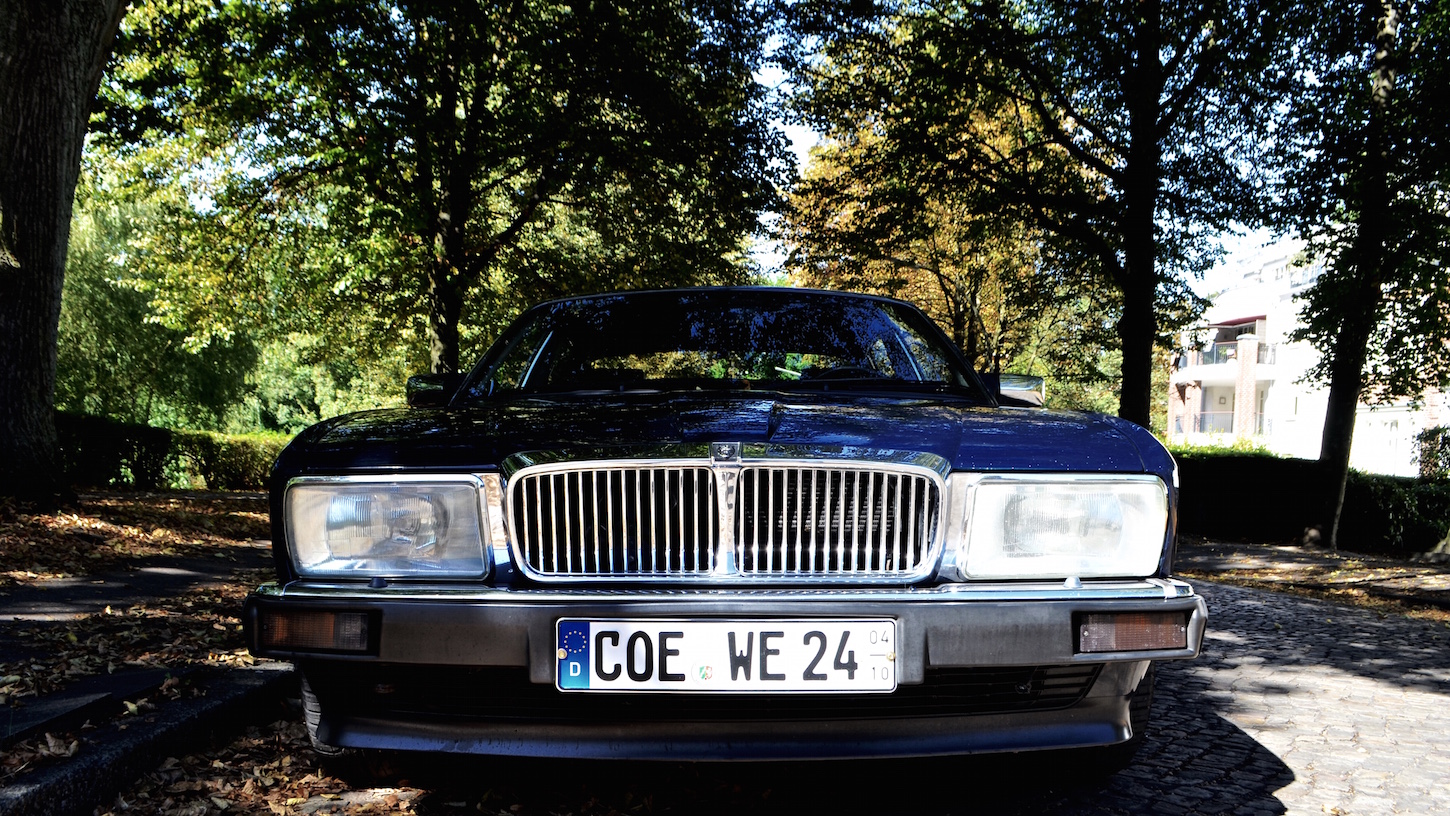 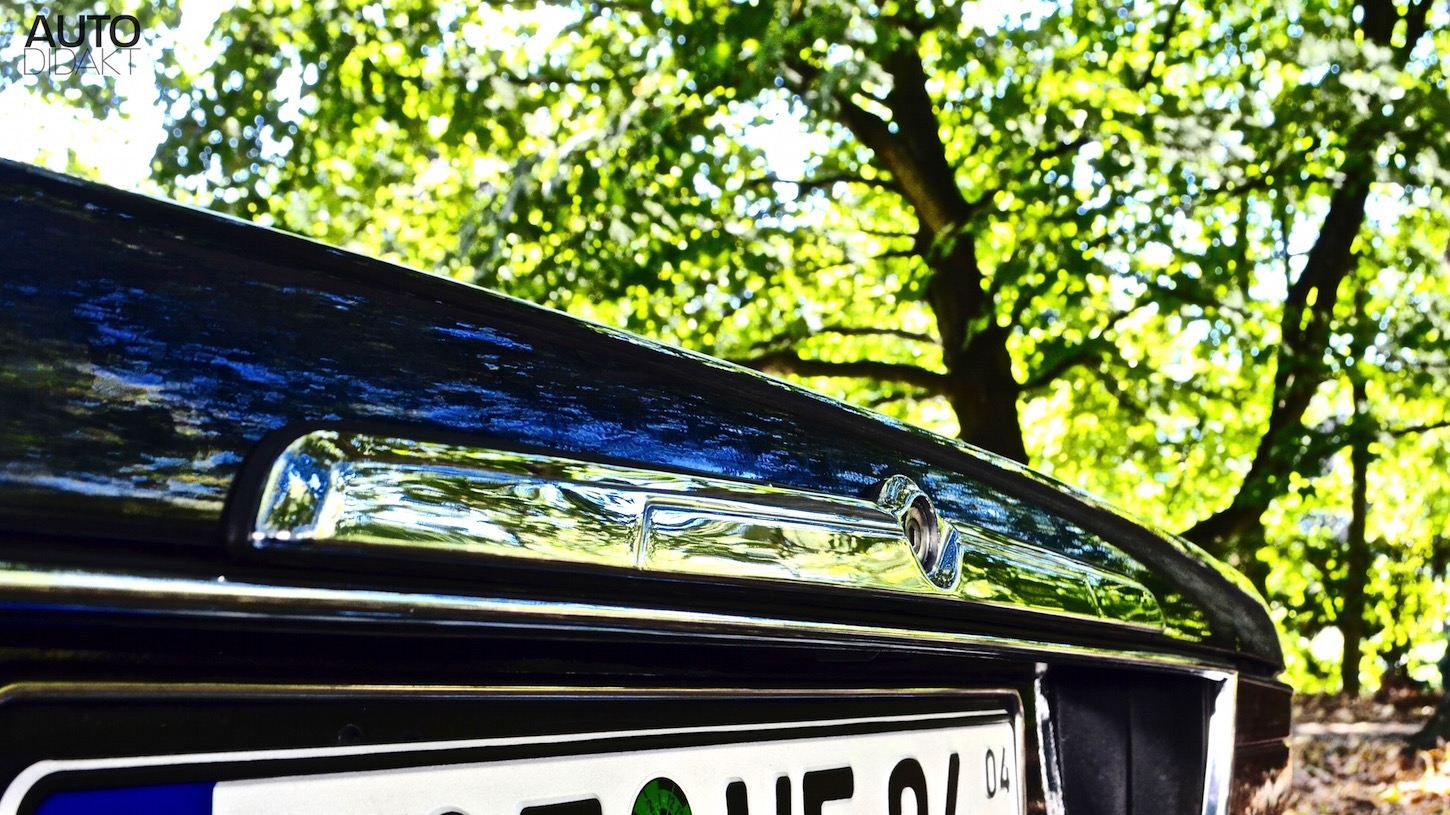 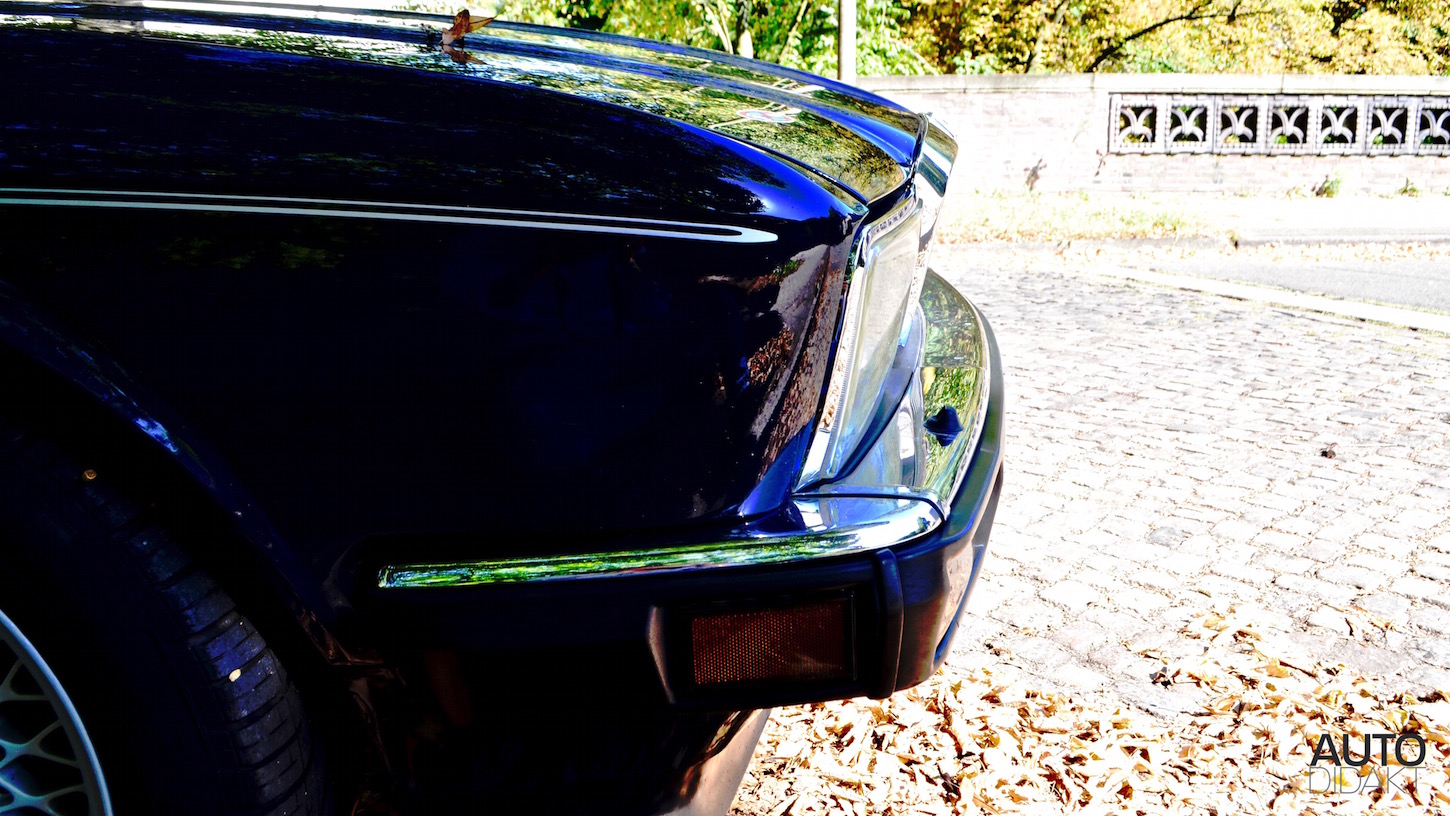 The development process of XJ40’s shape was a drama in itself. Amid the turmoil of the brand being taken over by British Leyland (BL), work on XJ40 became increasingly less of a priority. And to make matters worse, BL’s management, proved themselves to be somewhat clueless about the luxury car market.‘The only Jaguar thing I want to see on [XJ40] next time I come back is the badge on the front’ was reputedly one of the demands voiced by Lord Stokes, BL’s chairman at the time. Without someone with the means and stature to curb such nonsense - (Sir William  had retired by then) a series of rather bleak proposals for the next-generation Jaguar saloon were the result. Other proposals ordered at great expense from Italian carrozzerie Bertone, Italdesign and Pininfarina proved to be similarly unsatisfying.

Browns Lane eventually regained a tiny bit of autonomy towards the end of the 1970s and from this point, XJ40 gradually rediscovered its Jaguar-ness, which had always been the intent of those in charge of its design, among which not just designers, but engineers, such as Jaguar’s legendary then-chief engineer, Bob Knight, and his successor, Jim Randle. It is due to their concrete influence that XJ40 was equipped with a pronounced crown line at each side of its bonnet, which lends the driver perfect vision over the vehicle’s front extremities - a feature of the car’s predecessor, incidentally.

Meanwhile, the most obvious imprint left by chief designer, Doug Thorpe, would be the chrome bonnet finisher above the rear number plate, where art déco detailing reminiscent of his work in the XJ-S coupé can be found.

However, to some marque aficionados, even this may not be enough ‘vindication’, but there was another man involved in the saloon’s creation whose mention should have them belch out their dry sherry: a certain Sir William Lyons.

Having been barely tolerated at Browns Lane during BL’s tenure, Sir William was immediately invited back to his old domain once John Egan had taken over as Jaguar managing director in 1980. He would henceforth return on an almost weekly basis to review the styling of Jaguar’s upcoming models. Albeit physically frail, the old man shed a few decades of age the second he was presented with one of the new prototypes, still exhibiting the sharpness of eye that had been so significant in creating such a stylistic benchmark brand. Thus, after a decade-long break, Sir William returned to oversee implementation of the ‘Lyons line’ in the early ‘80s. This included, obviously, stylistic input to the almost-finished XJ40 saloon’s detailing.

It was during one of those visits that John Egan plucked up courage to address the all-new XJ’s most controversial stylistic aspect: its rectangular headlights. Egan explained to Sir William that he wasn’t completely convinced abandoning the traditional four round headlight arrangement for XJ40 was the right thing to do. ‘But I am’ was all the old man had to say on the subject – cue sherry projecting from certain Jaguar traditionalists' noses.

Not to suggest that XJ40 is stylistically flawless by any means, however. Particularly so when equipped with the round headlights that came with certain trim levels. So equipped, XJ40 can give the impression of an apologetic wannabe-Series III. Only when sporting the blunt, but consistent rectangular headlights does its appearance gain real coherence.

Moreover, even with 30-year-hindsight, the blackened - or High Contrast Tail Lamps, in official parlance - remain a rather vulgar gimmick that renders dark exterior colours a must. This conveniently also helps to distract from the somewhat crude separate bumpers, which appeared quite old-fashioned in 1986. The same could  be said about the jarring chrome accent at the base of the d-pilar, although in this case, one’s choice of colour wouldn’t be as effective at brushing over this particular visual flaw. Albeit a clear case of cold comfort, it’s nonetheless reassuring to know that both engineers and stylists at Jaguar were quite aware of this source of irritation - but found their hands tied, due to manufacturing necessities, which required this ungainly solution.

But this list of detail issues isn’t enough to undermine XJ40’s major ace-up-its-sleeve: it’s unquestionably Jaguaresque stance. This is a saloon that sits on its four wheels as only a Jaguar could, without the awkward tiptoe appearance or slightly limp overhangs of its successor. Which is all the more surprising, as XJ40’s body was probably shaped by accident, at least in part. For, according to former Jaguar chief engineer, Jim Randle, the urban legend that the rear of the XJ’s prototype dropped when it was transported to be 3d scanned is likely to be true! ‘One could claim that the more sloping rear is actually more Jaguar-like than the previous iteration’, Randle dryly notes on the matter today.

And then there’s XJ40’s pièce de résistance: its cabin ambience. Although the result of fortunate circumstances, rather than mere coincidence, its origins could nevertheless be described as ‘tumultuous’. Originally intended to exude a more ‘technical’, teutonic ambience than Jaguars of yore, the first incarnation of XJ40’s cabin actually featured only a few apologetic stripes of wood. Instead, plastics were the order of the day, as synthetic materials were associated with the high-tech products of the time. Thank god that Jaguar’s management eventually decided to have the all-new XJ’s cabin ‘checked’ by customer clinics. Due to the negative reception with which the plastic interior ambience was met there prompted a redesign of the cabin in 1984 - just one-and-a-half years prior to the car’s market launch - that was as hasty as it was thorough. 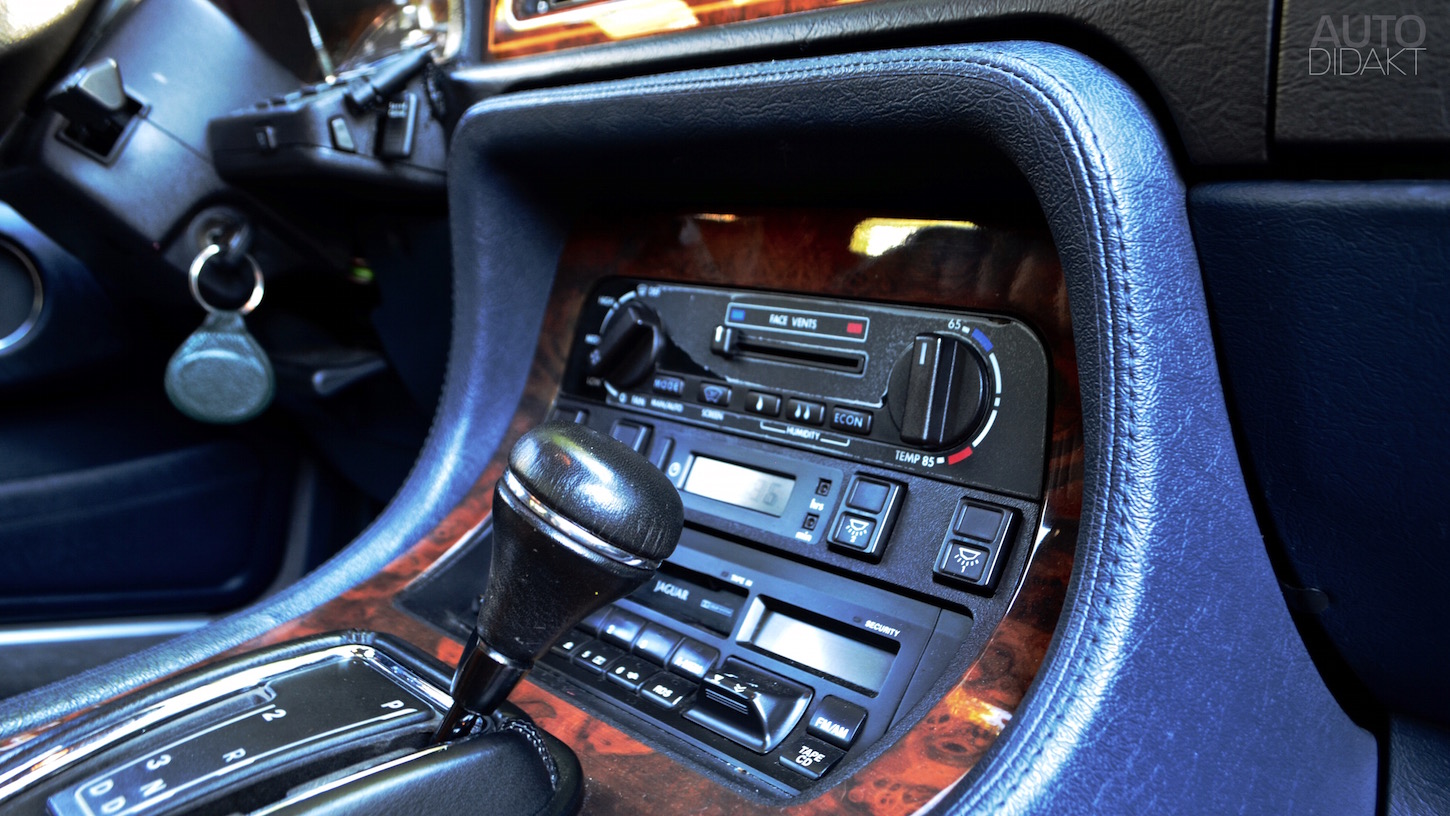 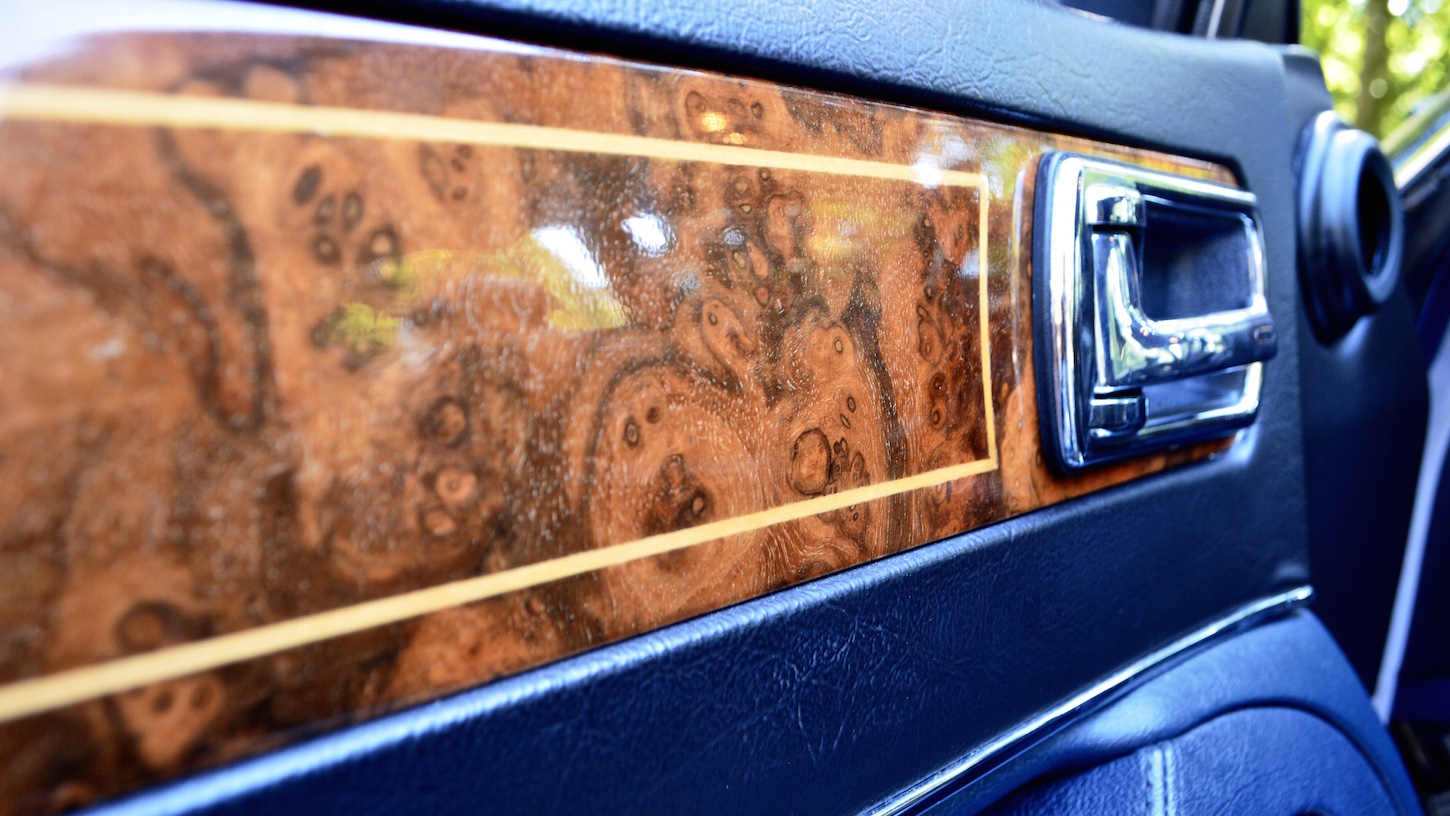 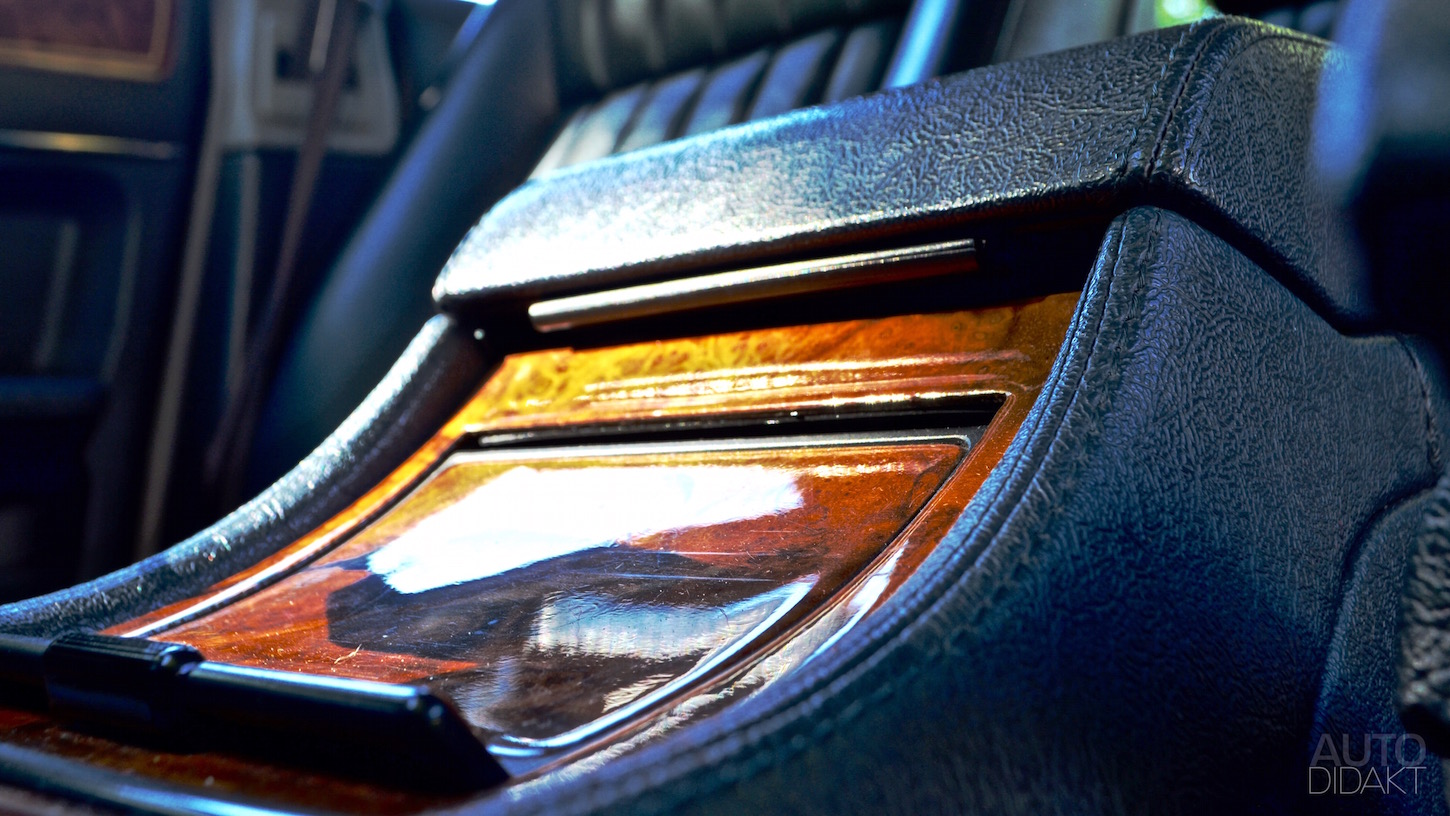 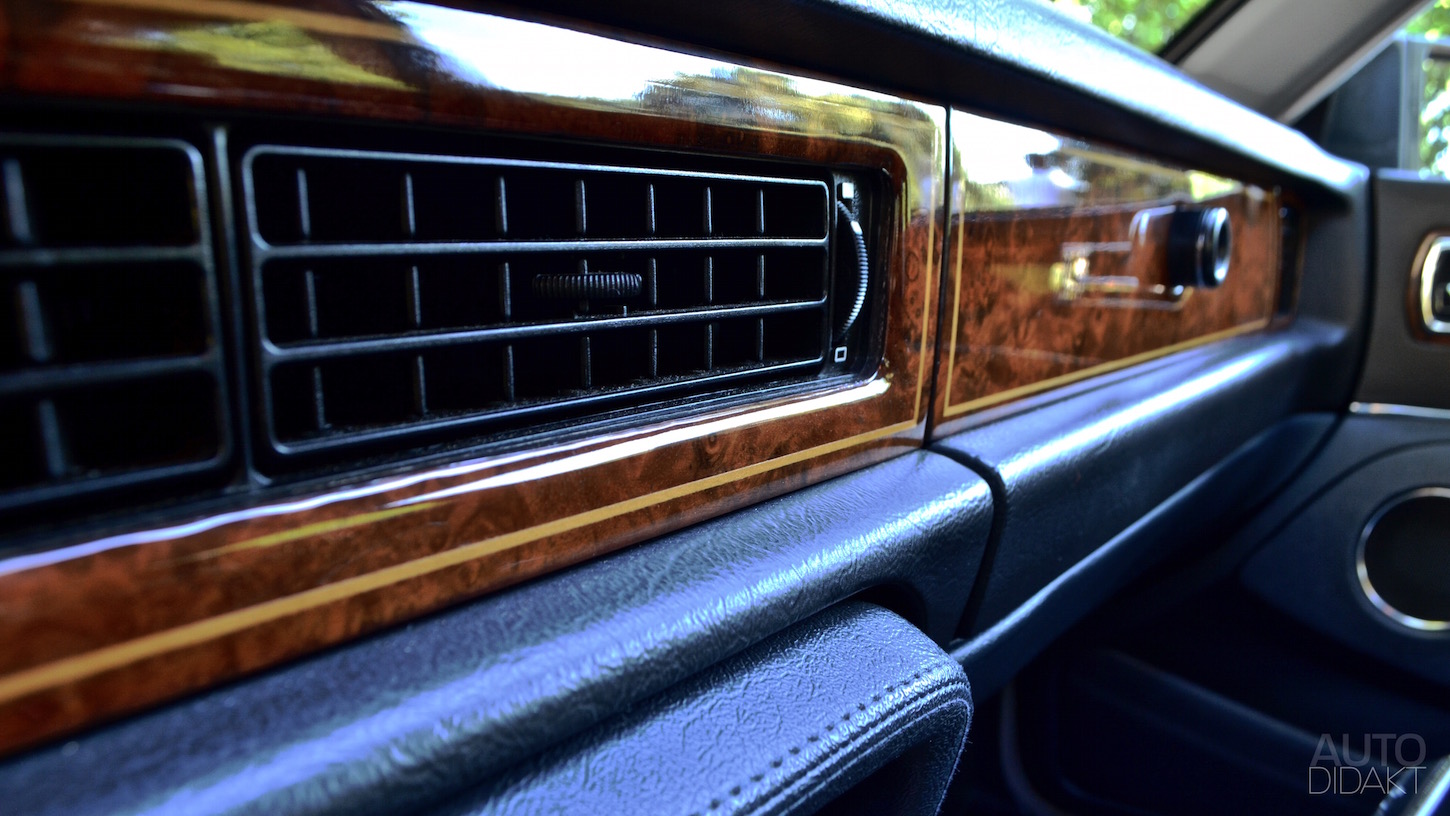 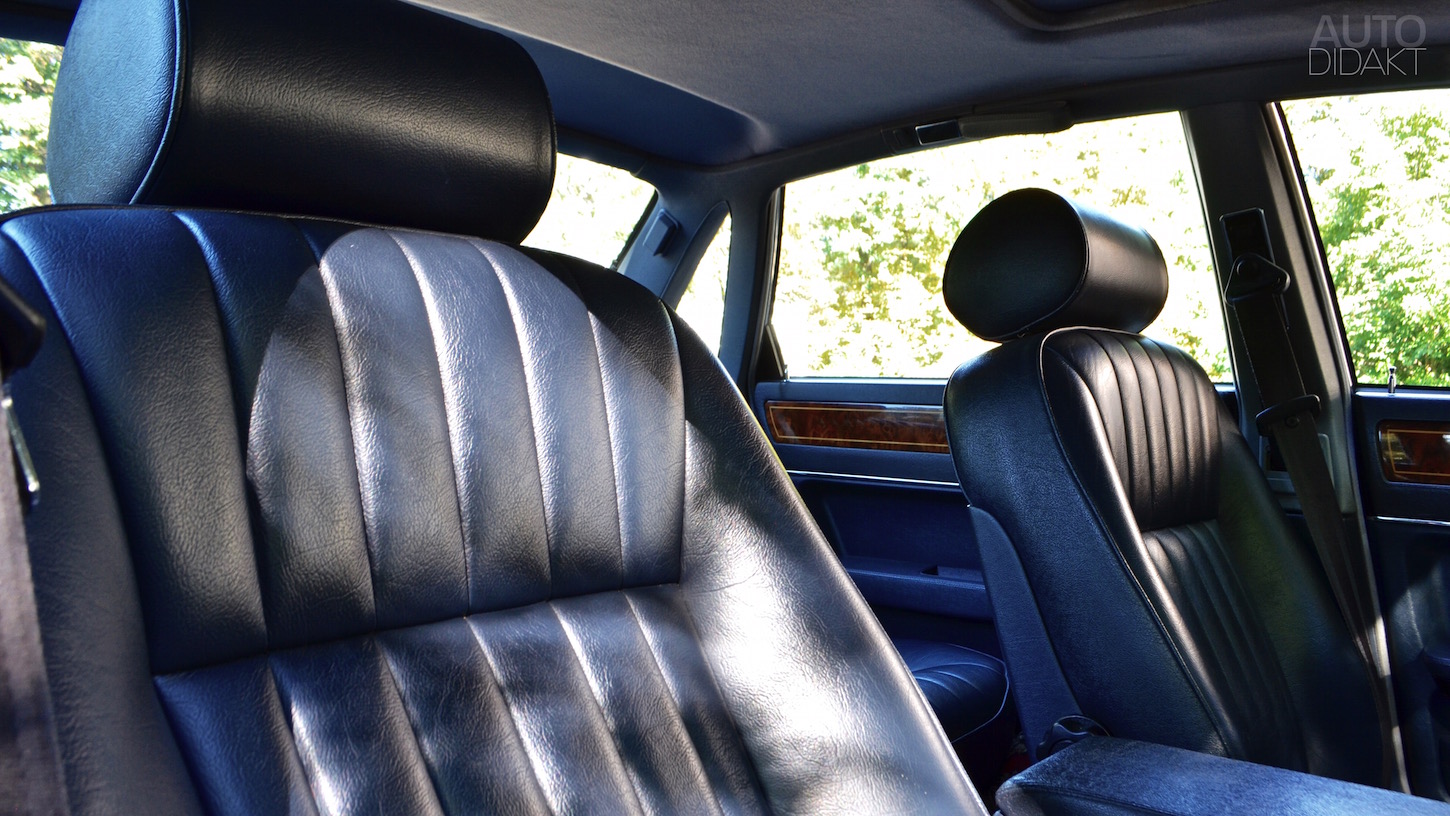 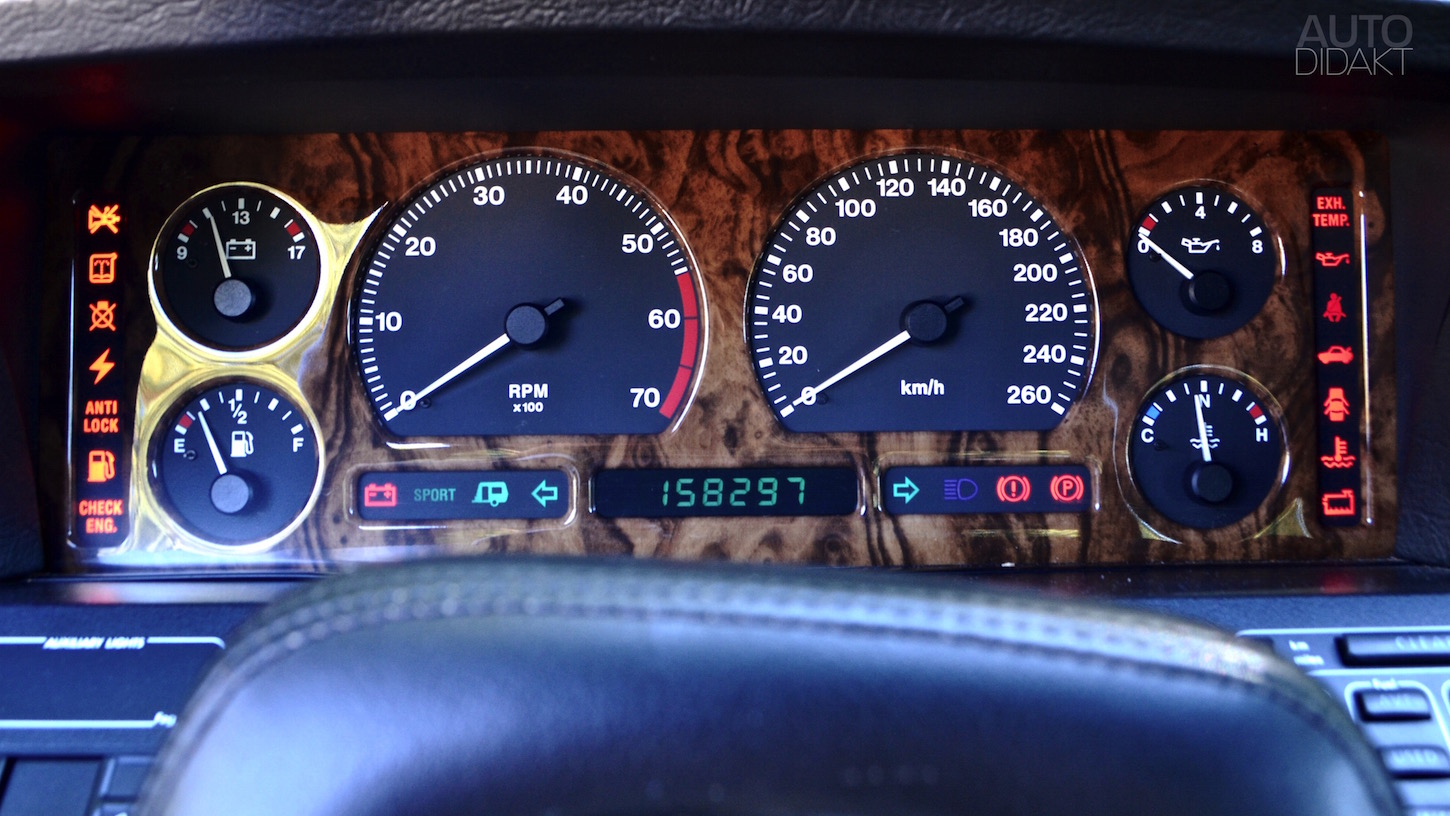 Thanks to real wood veneers betraying astonishing levels of craftsmanship (incorporating actual inlays for the Sovereign models!), Connolly hide-covered seats and carefully placed chrome details (which were quite the anachronism in the ‘80s), the XJ40 offered an ambience only a Jaguar could ever feature. As in the past, low building costs were hardly a top priority in this instance, as epitomised by the arched veneered lid on the centre console, which was a nightmare to manufacture, but clearly worth the effort - and money.

As alluded to earlier, it would be hyperbolic to claim the status of stylistic masterpiece on XJ40’s behalf. Its development history was too much shaped by external circumstances, its form too much defined by necessity, rather than vision for such a lofty claim. And yet it would be even more absurd to claim that XJ40 is anything but the last proper Jaguar.

Recommended Reading: The ultimate account of XJ40's genesis can be found at www.driventowrite.com

I am priveledged to own a sovereign xj40 4.0 , it is a superb car to drive, it gives you a driving experience, whether you are travelling all day, or on a run to pick up some milk. You dont go from a to b in this jaguar, you embark, you travel, you arrive.

I own a 94 XJ40 Daimler, and it is a perfect car to enjoy. I do meet other Jaguar owners that do not understand the prodigy of this car, and I consider that their loss. We drive the cars during the summer, and thanks to a nice boot, the family can all enjoy it.
Very nice to read the article as the XJ40 surely should be valued for the great car it really is, from bot a design and a technical point of view.

I also took my time to appreciate XJ40 for what it is. But recent exposure has turned me into a bonafide enthusiast. There's no post-XJ40 Jaguar I'd prefer to own.

I really love the XJ40, I think its design has stood the test of time and looks even better than when new. I know it had a protracted gestation, perhaps that’s why distance has been kind. It has a simplicity of form that is truly elegant and was lost on the X300 with its chintzy cladding and poor proportions.

You're quite right, time has been very kind to the XJ40. Its proportions and stance can properly shine in today's motoring environment of hostile-looking behemoths on stilts. As long as there's no XJ Series I-III parked next to it, the '40 can be considered a most elegant automobile. Only when compared with its predecessors does the absence of the Lyons touch become truly apparent.

Tidied-up d-pillar and rear lights apart, I fail to see how the X300 improved upon its much-derided base car, but I can accept it as a decent stab at a Jaguar XJ design. However, the X308 facelift of a facelift is car for which I have no affection whatsoever. Which I blame on the flaccid detailing, not to mention that poor new cabin design.

I agree, the X350 that followed was disappointing in its evolutionary styling, but its proportions are great. I think we’ll grow to love the current X351, which looks so much more exciting and less limo-taxi than its Audi/BMW/Mercedes rivals.