Being the first truly luxurious utility vehicle, the Land Rover Range Rover (L322) might be blamed for its epigones. Or simply appreciated for its outstanding qualities.

2001 turned out not to be the year of noteworthy space odysseys, but the year in which the die was cast on the automobile’s ensuing two decades. The events of 9/11, a minor and a major economic crisis and other factors would change how the world lives. And what it drives.

Petty though it may sound in this context of global politics and economics, the introduction of two vehicles that are at the same time both the polar opposite of one another and brethren-of-a-kind must also be called a watershed moment in automotive terms.

The cars in question were the Porsche Cayenne and the third-generation Land Rover Range Rover. And what these two automobiles did was to show the supposed breadth of what can constitute a Sports Utility Vehicle: High-performance motoring with astonishing agility and immense practicality on the one hand, sophisticated comfort, good taste and astonishing off-roading capabilities on the other. There had been SUVs before this Range Rover and the Porsche, but none possessing such a distinct set of conflicting qualities. 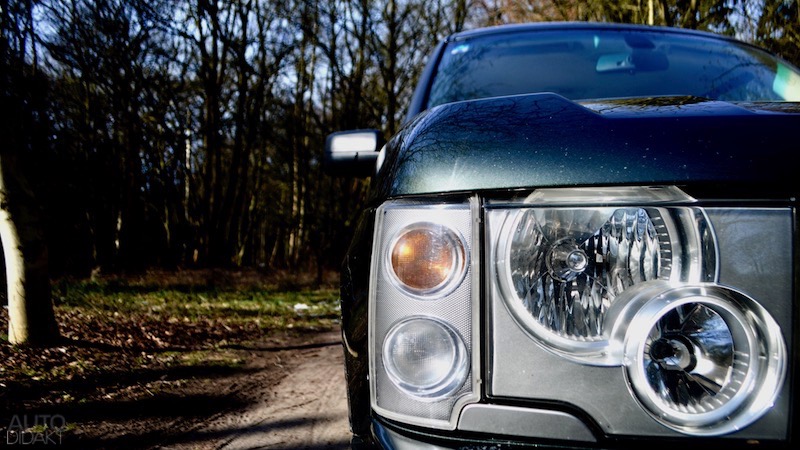 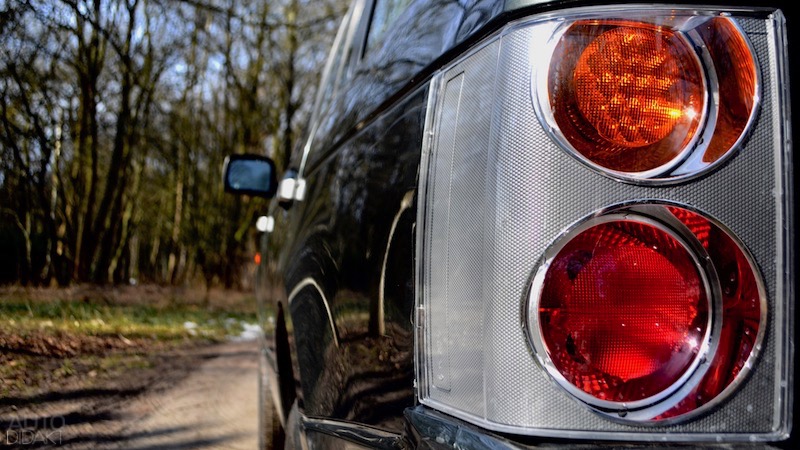 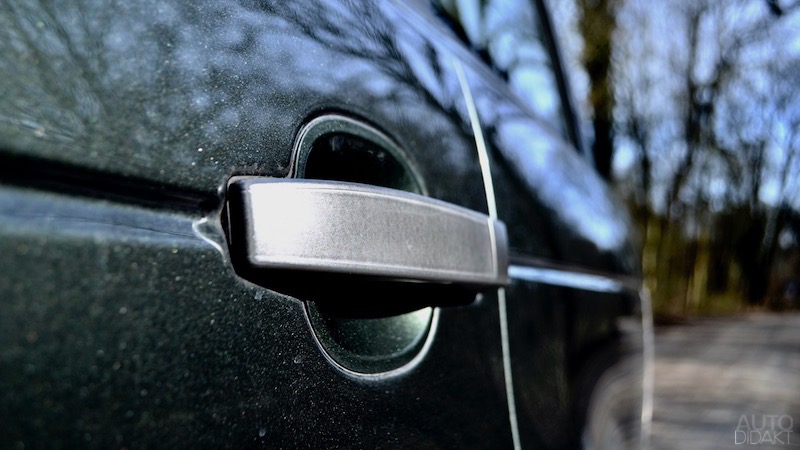 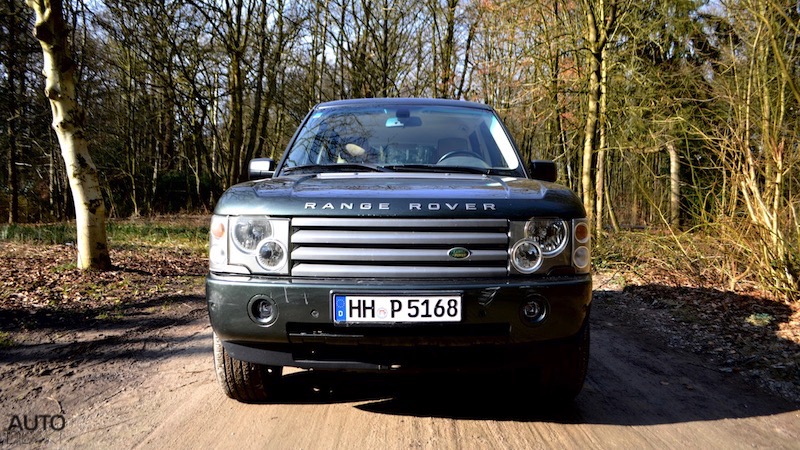 Since 2001, the combination of seemingly opposing traits has become the mainstay of creativity in the automotive realm - for better or worse. With hindsight, it’s the Porsche that’s proven to be the more influential of these two cars, mainly because it really does try and combine ‘sportiness’ with significant utility - an undertaking that has since become the holy grail of product planning across almost all car manufacturers.

In distinct contrast, there’s little one could describe as ‘sporty’ about the Range Rover, yet plenty of elements that appear highly sophisticated to this day. It is blatantly obvious that the Range Rover didn’t have to perform as much of a Quadratur des Kreises as the Porsche, which was and still appears to be an extremely uneasy concoction of conflicting proportions and details that never added up to a satisfying whole. The Range Rover, on the other hand, has not merely withstood the test of time, but gained the elusive quality of timelessness within less than two decades.

Particularly in its early guises - almost bereft of any brightwork, apart from its light units, with just a sprinkling of carefully placed splashes of robust, yet high quality grey plastics -, this Range Rover (internally known as L322) possesses an assertiveness few cars of any category can muster. It’s so inherently ‘right’ because of the consistency of both materials and forms, its robustness (which is offset by the careful detailing) and its pleasing proportions. All of which embody a fitness for purpose that has always been rare. And is more so today than ever.

Rather than falling into that amorphous category of SUV, the Range Rover quite simply is a luxury off-roader. Which is more straightforward a concept than most others, yet so inherently ambitious that one needn’t even look at a Bentley Bentayga to see how easily this could’ve gone the wrong way.

As is often the case, this seemingly most consistent and self-explanatory of automobiles is in fact the result of diligent research and the exploration of more than one idea.

Land Rover’s Range Rover model may have started life as barely more than a 4x4 vehicle that wasn’t a pain to live with or drive on fully developed roads, but had already gained additional layers of comfort and luxury with each passing decade. Yet by the end of the 1990s, the Range Rover had become a somewhat creaky device, albeit one buoyed by the lack of real competition. But with Land Rover being owned by BMW at this point, the all-new Range Rover for the new millennium could finally enjoy the benefits of a generous research and development budget.

Said research and development was undertaken by a joint Anglo-German team, operating from Munich’s Forschungs- und Innovationszentrum (FIZ). The design team, led by Brit Ian Cameron, on the German and American, Don Wyatt, on the British side, were a key part of this truly globalised effort to update and partially reinvent a British icon elicited the best of both worlds. The Germans supplied funds and infrastructure, whereas the British delegation contributed flair and Land Rover integrity.

Due to  the full support of BMW production overlord, Wolfgang Reitzle, Cameron, Wyatt et al enjoyed significant autonomy within the Bavarians’ organisation, which they exploited to such an extent that the finished car is so far removed from the BMW products of that period that it truly feels like the product of a different company altogether.

Just as BMW chief designer, Chris Bangle’s stylistic revolution was getting into gear, the Anglo-German team not only sharpened up and modernised a classic design, but redefined luxury motoring.

This is particularly apparent in L322’s cabin, which was based on a proposal by Alan Sheppard. It introduced an altogether new approach to the use of materials in a luxury car’s interior. The abundance of real metal may not be so astonishing to the onlooker two decades later, but in 2001, the norm, even in this class of automobile, was still very much that everything one touched was either leather, lacquered wood or plastic. In the L322 Range Rover, there’s not just metal on top of that, but also natural wood, soft leather and high-quality, crackle-finish plastics to be found and touched. 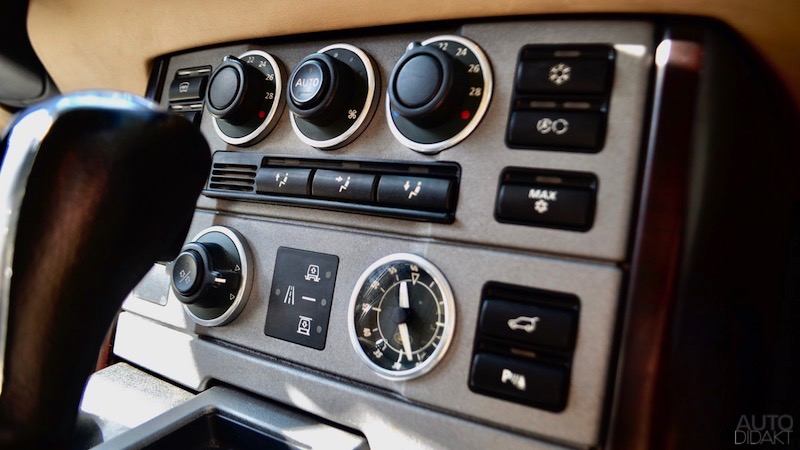 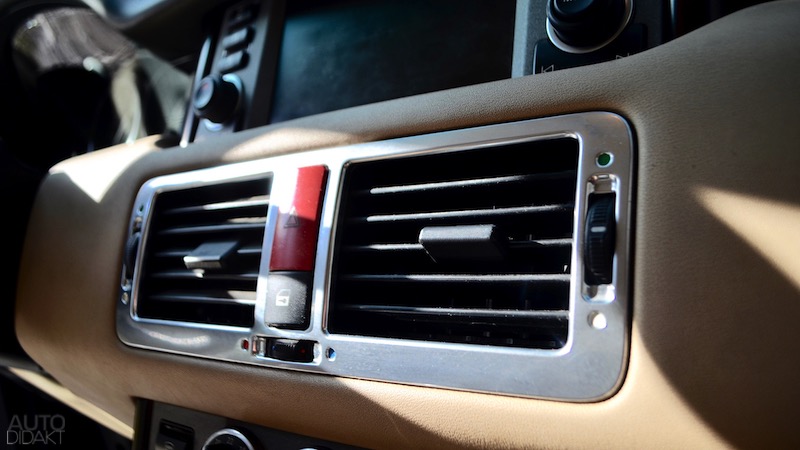 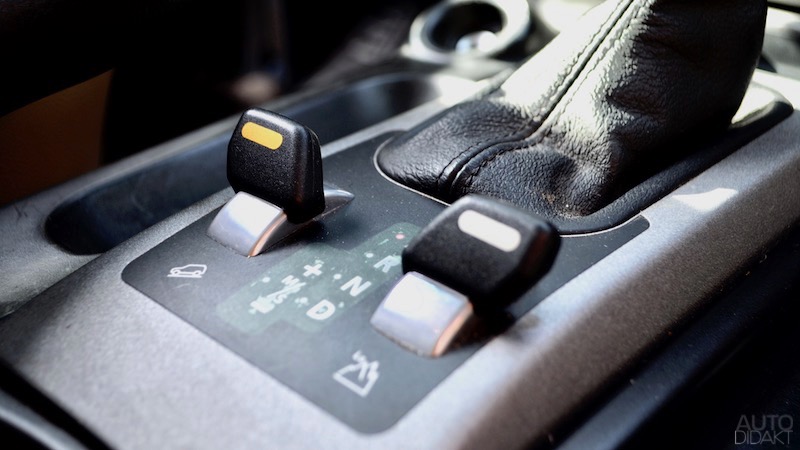 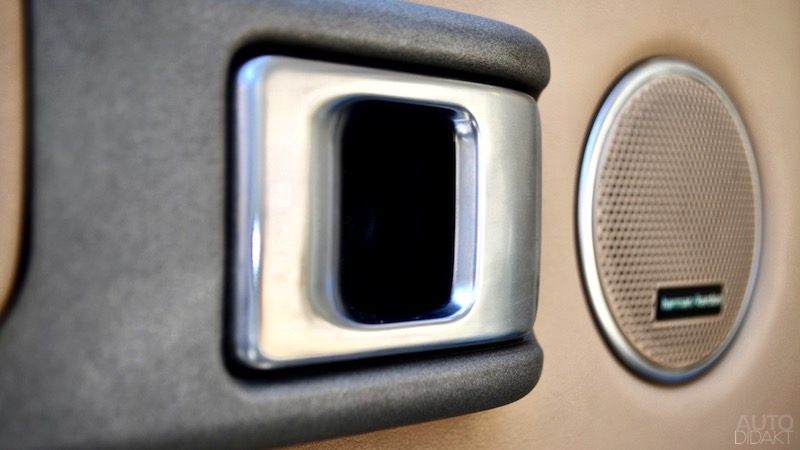 This finesse was mostly down to the contributions of the British designers, who possessed a less technical approach towards the use of materials. This led to the ‘structural’, rather than merely decorative employment of wood on the dashboard, centre console and doors. It also resulted in the use of real metal around the air vents, steering wheel and so on - which should have been boycotted by the German beancounters, but thankfully wasn’t, due to the design team’s aforementioned semi-autonomous modus operandi.

It’s the elegant juxtaposition of cutting edge-modernity and traditional elements that turn L322 into a triumph, just as other attempts at reinventing ‘British class’ were failing. In contrast to cars like the 1998 Jaguar S-type or Rover 75, this Range Rover was respectful to its heritage, but also unafraid to push envelopes. Where contrasting piping would appear quaint and retrograde in these other cars, here it was fully plausible within the context of a cosy, yet highly advanced cabin design. 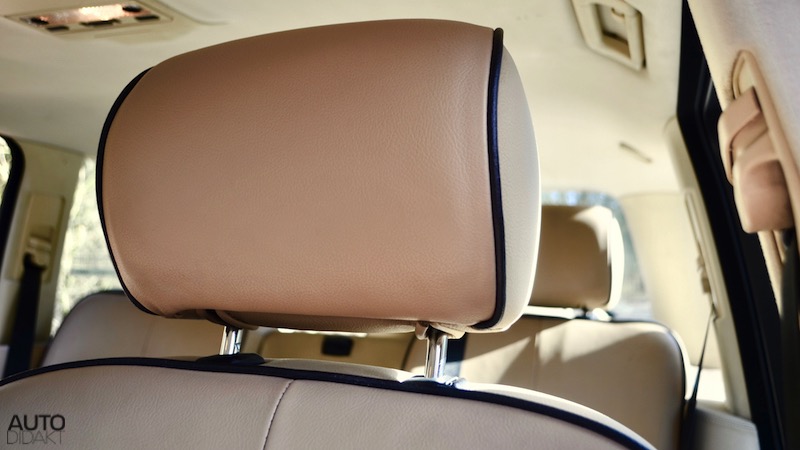 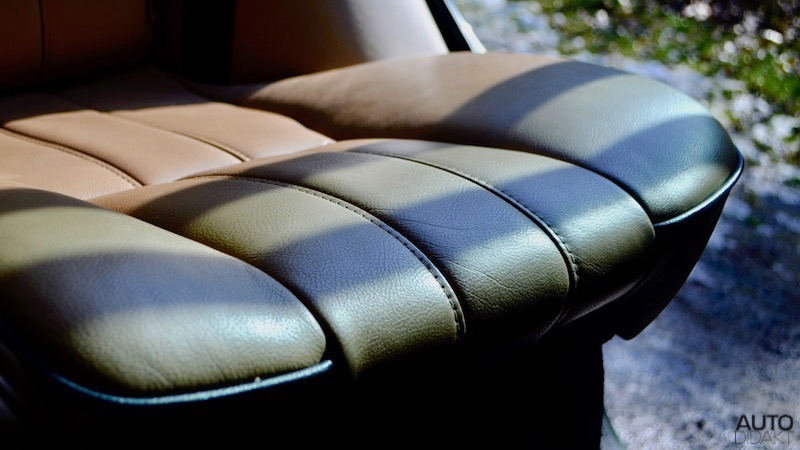 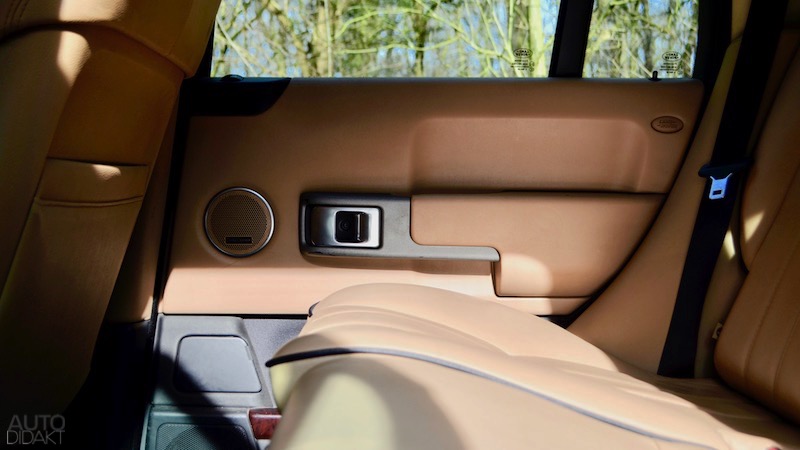 Similarly, the third generation may have harked back to the original Range Rover in terms of its exterior’s overall proportions, but at the same time, it avoided retro cliché, with a sufficient number of new ideas incorporated for L322 to develop an identity of its own. That the original car’s single seven inch headlamp interpretation is an example of the designers’ respect for the original car, without allowing this to become a burden.

The decisions leading to the Range Rover’s final appearance were equally diligent and involved quite a bit of trial & error. Proposals by both German and British stylists were studied, with the exterior one by Land Rover designer, Phil Simmons, ultimately chosen as the one to go forward. However, Simmons’ original design lost some of its more overt nods to the first-generation Range Rover during the course of the ensuing process. This was as much to do with the intention not to create a retro design as the necessities a significantly changed and updated production process entailed, what with this being the first ever monocoque-bodied Range Rover.

The result of these changes was a stance that wasn’t as massive and angular as in the first drawings, but also more substantial than early prototypes. L322’s window-to-body ratio may not be quite up to the same level as the original car’s, but it retains a truly lofty outside and airy interior appearance, aided by such excellent wheelbase and track width proportions that this Range Rover, despite its size, doesn’t rely on wheels of a silly size to appear planted.

Substance could generally be described as the overarching theme of the L322 Range Rover, for its physical appearance, design concept and stylistic execution all feature it in spades.This in turn rendered it not just a pace setter for its own niche - the luxury utility sector - but the automotive luxury market in general. In terms of sheer physical presence, the Range Rover had always played in a league of its own. Starting in 2001, its sheer air of quality, comfort and class put it not just on the same level as the established luxury saloons, but one rung above them.

Eventually, L322 didn’t turn out to be just a game changer, but a highly successful dry run for the reinvention of yet another British icon. For soon after it was signed off, a sizeable part of the design team behind the third generation Range Rover was tasked with no less daunting a task than the redefinition of The Best Car in the World. But that’s another story.

A photo gallery showcasing L322's development process can be found on www.aronline.co.uk