Struggling with its present whilst trying to define a future, the storied Modenese marque decided to take a look at its past. Which resulted in the Maserati 3200 GT.

In this day and age, it may appear as though the entirety of the Italian automobile sector has been perpetually struggling (Ferrari excepted). But it wasn’t always thus. Two decades ago, Lancia was still a (barely) viable business, rather than an eternal going concern. Alfa Romeo was enjoying an astonishing renaissance on the strength of the commendable 156 saloon. Fiat was a hotbed of stylistic creativity, with an output that was rather ‘hit & miss’ in terms of commercial success, but almost always interesting in some way.

Maserati, however, wasn’t much more than a mere shell by that point. A hollowed out marque that was too weak to even trade on past glories. A callow attempt at modernising the brand, courtesy of temporary owners, Citroën, and the increasingly reckless diversification-cum-debasement at the hands of Alejandro de Tomaso, had seen to that.

So by the mid-1990s, this most aristocratic member of the Italian automobile elite, was left with all the grace of a broke geezer. The bodies of the myriad Biturbo derivatives that de Tomaso had commissioned in seemingly frantic fashion during those final years of his ownership were certainly more glittering shell suit than the Caraceni cashmere elegance of Maseratis of yore. 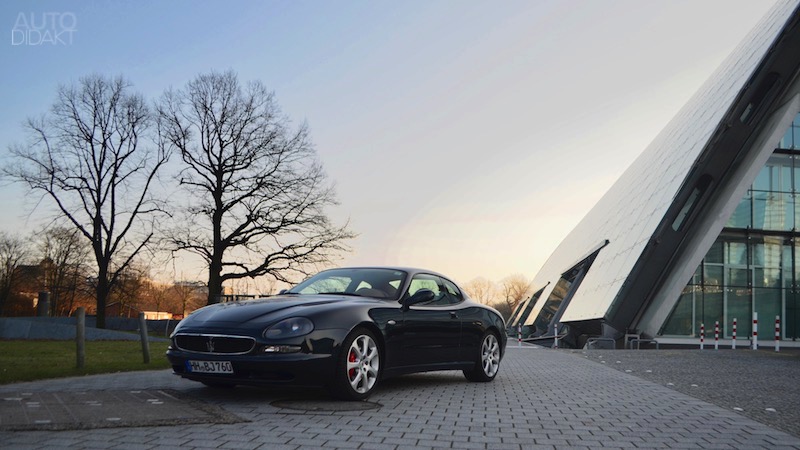 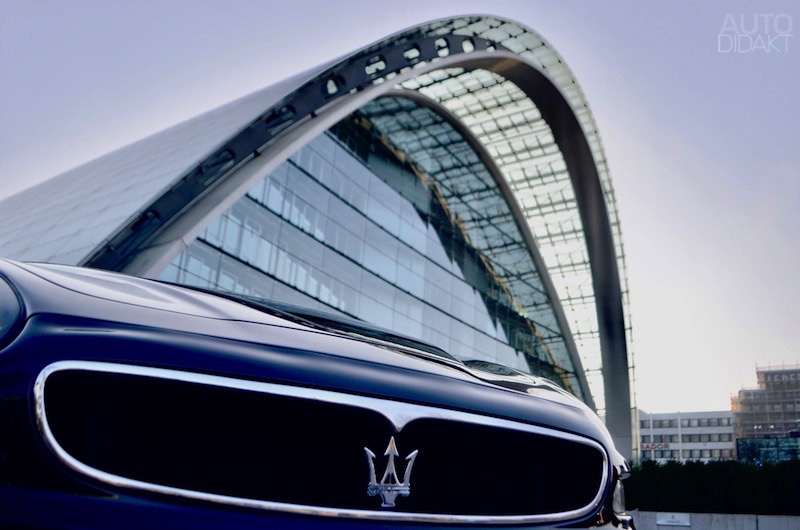 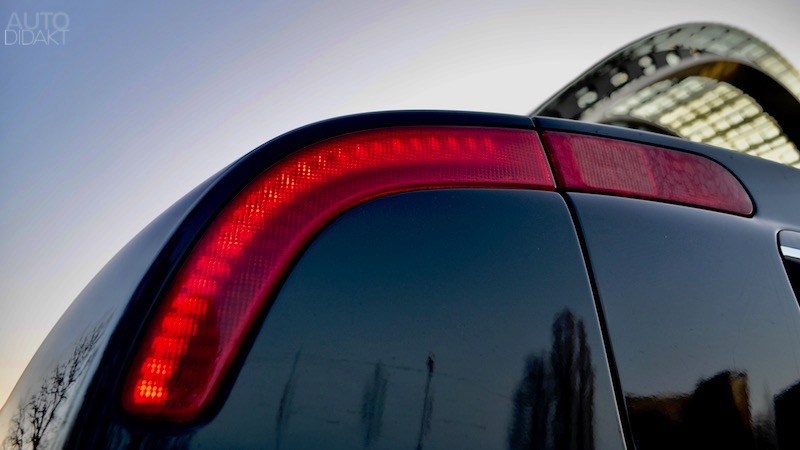 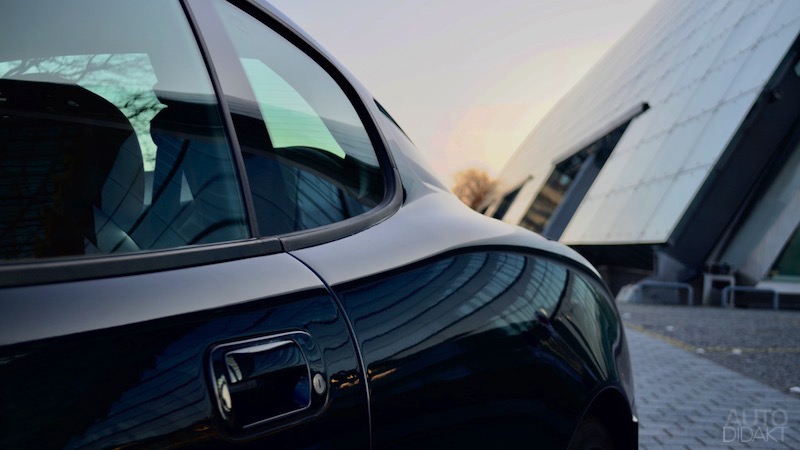 But then, under Fiat ownership, and with significant input from Ferrari management under luxury product expert, Luca di Montezemolo, Maserati was about to be reborn. And not merely in the sense that the brand would come up with a new, contemporary product to make up for years spent at idle, but by redefining what Maserati meant.

During said idle years, Maserati had been purveyor solely of increasingly gauche and anachronistic derivatives of its original Biturbo model. That car’s original, clean, Giugiaro-inspired (albeit Pierangelo Andreani-penned) lines had since been ‘updated’ by the once great Marcello Gandini, to increasingly diminishing returns. This meant that by the mid-1990s, all Maserati offered were relatively compact two- and four-door saloons and convertibles of out-datedly blocky appearance that exuded a sense of the exotic in the quirky, rather than glamorous meaning of the term.

Di Montezemolo, who had so comprehensively reshaped Ferrari over the previous decade, understood that such a strange range of cars possessed curiosity value, rather than proper allure. For that reason, it was decided to return Maserati to the brand’s roots and reestablish Il Tridente as a maker of sophisticated gran turismi, rather than awkwardly idiosyncratic compact muscle cars.

Rather than continue the Modenese company’s recent cooperation with Marcello Gandini, di Montezemolo approached Giorgetto Giugiaro - another icon of Italian automotive design - to lend this concept a form. Unlike Gandini, Giugiaro had evolved his style as to remain both contemporary and competitive. He also had a history with Maserati, what with the sublime original Ghibli GT, as well as the mid-engined Bora/Merak models and the third-generation Quattroporte saloon having been lent their respective shapes by ItalDesign’s capo.

In another break with the recent past, it was also decided that the all-new Maserati model was not to be another two-door saloon of BMW 3 series proportions, but a traditional semi-fastback coupé.

The last Maserati of this kind, the striking Khamsin (penned by Gandini, incidentally), had gone out of production in 1982, more than a decade ago by that point. But it was that car’s inherently glamorous flair, which had been lost in the intervening years under de Tomaso ownership, that the new Maserati was supposed to replicate, yet in a fashion appropriate for the ‘90s.

Said fashion was generally defined by restraint and a sense of postmodern romanticism, not to mention the über-trend of soft body surfaces. Giugiaro, having been among the first Europeans to adapt this style, obviously had little trouble delivering a design in keeping with this, particularly as he had already penned a GT in this vein with the 1995 Daewoo Bucrane concept car. This led some commentators to speculate that Giugiaro had simply recycled that car’s design for the Maserati, but given how they differ both in terms of basic proportions and detailing, that accusation would appear rather trite.

Upon its unveiling in 1998, the Maserati 3200 GT appeared like a solid return to form. While lacking the sharp flamboyance of its Khamsin or the grace of its Ghibli predecessors, the first ‘proper’ new Maserati in more than two decades possessed enough class and flair to give contemporary competition like the flawed Aston Martin DB7 or the clinical BMW 850Ci a run for their money. And thanks to outstanding packaging (betraying one of Giugiaro’s fetishes), it trounced either of them in terms of interior space.

Said interior was the work of another high profile designer: Former Pininfarina wizard, Enrico Fumia. His penchant for striking graphics, which he had employed to great effect on cars like the Audi Quartz concept, the Alfa 164 saloon and 916 Spider/GTV models, is also in evidence inside the Maserati. There, a Y-shaped dashboard dominates a cabin that juxtaposes lush Poltrona Frau hide with some incongruous Fiat switchgear - and is therefore in the best tradition of Italian luxury marques’ interior style.

Fumia’s graphics may since not have aged quite as gracefully as the rest of the car, and some of the buttons and fittings do appear flimsy - and that is despite reported clashes with Luca di Montezemolo over the choice of materials and some supposedly too attention-grabbing details. But the overall pleasantness of this airy, charismatic and (mostly) genuinely luxurious environment is hardly affected by this. The delightfulness of the leather-lined roof alone should be more than enough to offset the odd brittle, ill-placed lever to anyone with even a modicum of appreciation for truly sophisticated natural materials. 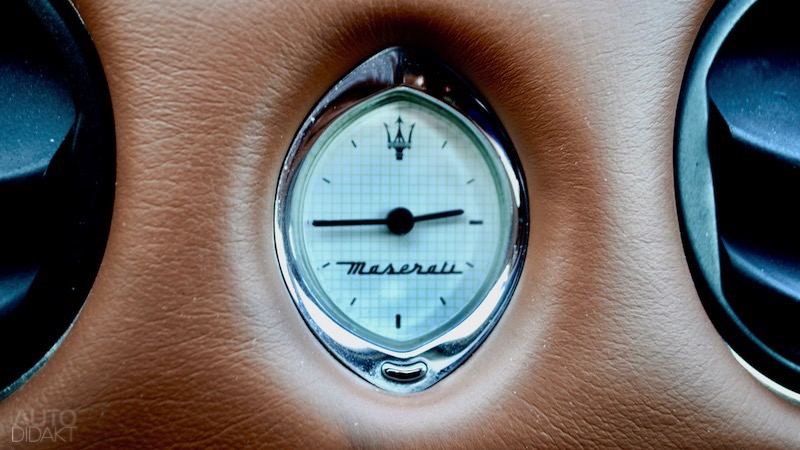 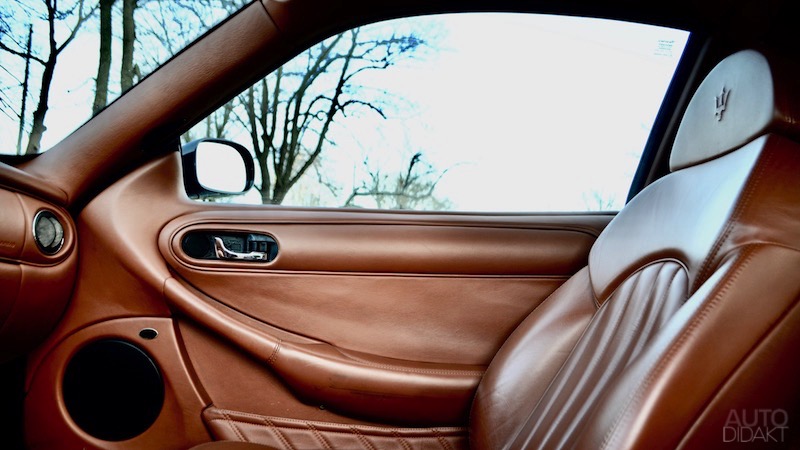 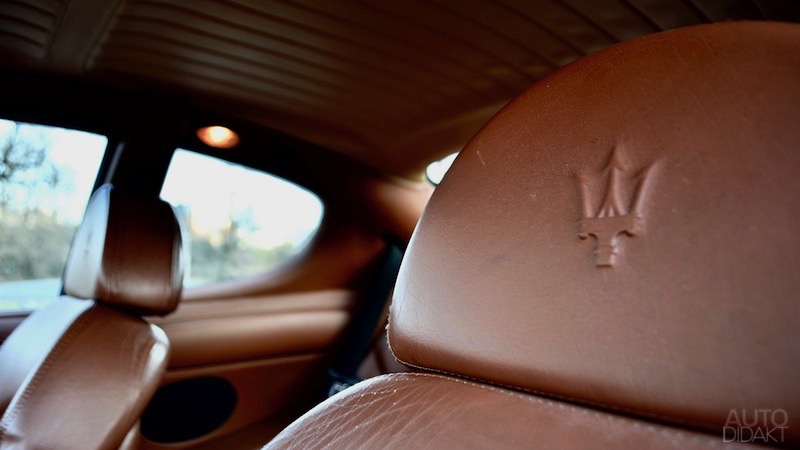 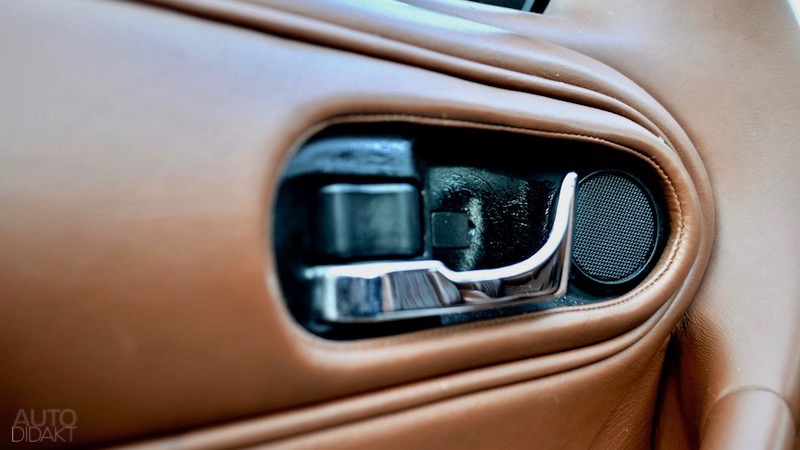 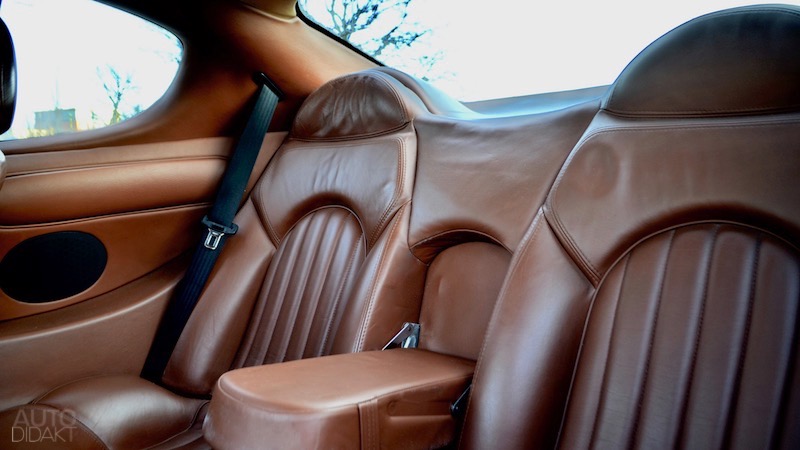 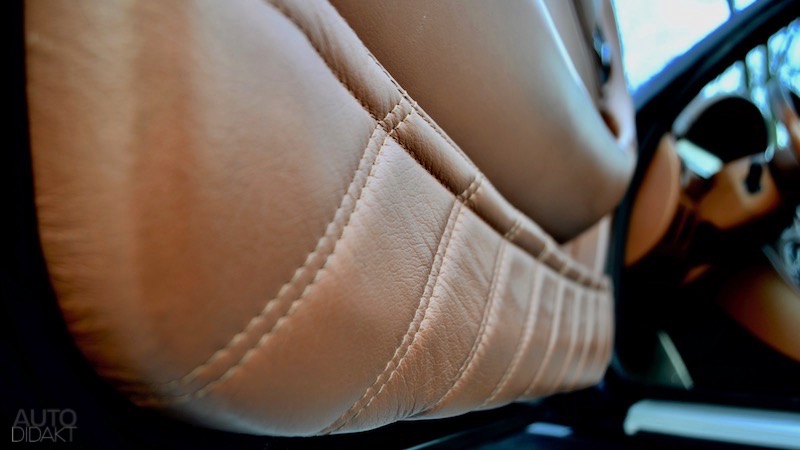 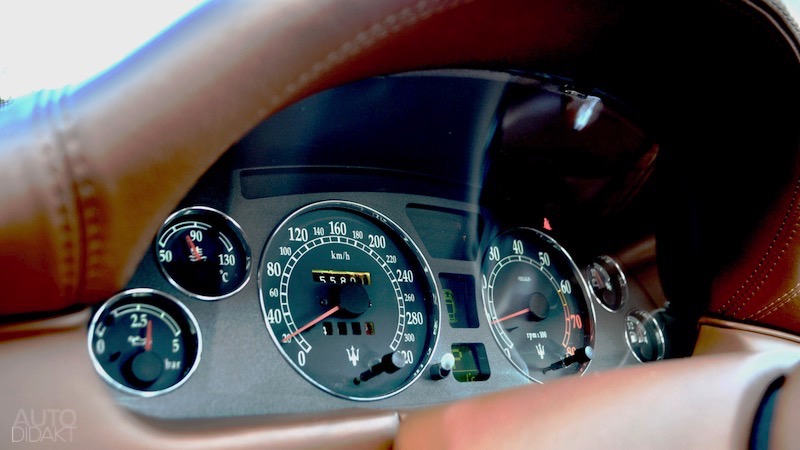 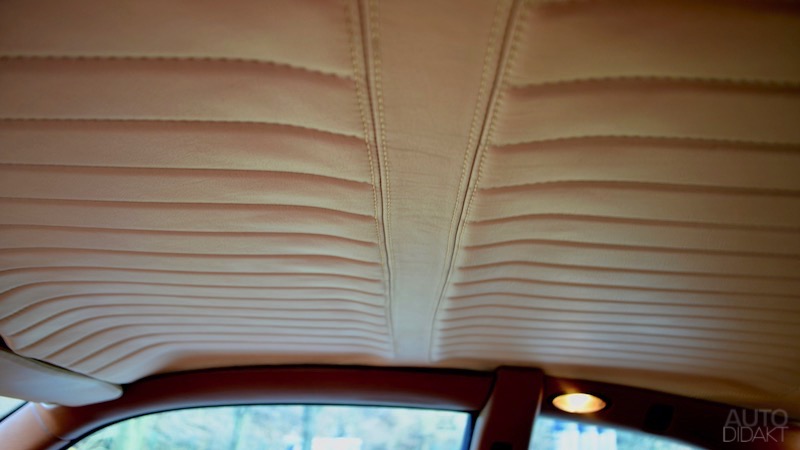 The final appraisal of the 3200 GT’s follows along similar lines, incidentally. For while this Maserati may want for a bit of drama, it more than makes up for this slight deficit with its delightfully fluid surfacing (which did not appear as noteworthy in the calm ‘90s, but certainly does today) and restrained graphics (which include the only obvious nod to Giugiaro’s Ghibli on the c-pilar). And then there are, of course, those rear lights.

The boomerang shape of the Maserati’s LED rear light units was stunning back in the day and teaches a lesson in the power of simple, striking graphics to the kind of overwrought ‘night design’ to which entire design departments are devoted today. So impactful was Giugiaro’s boomerang design back then that Fiat’s CEO at that time, Paolo Cantarella, could not help but claim authorship - arguably the biggest compliment Giugiaro, di Montezemolo and everybody else involved in the creation of this all-new, traditional Maserati could have wanted.

Since 1998, Maserati has yet again been subject to various changes of personnel and market orientation, which has resulted in the Modenese Tridente offering no sports car whatsoever for the first time in its history, exactly two decades after the 3200 GT had reestablished this most aristocratic among Italian sports car marques.

But hopefully, lo spirito Maserati will eventually return. Like a boomerang, so to speak.

what a fine assesment of the 3200gt ,a car design that grows on you like only the master himself can do ... imagine crossing europe at high,er speed wraped in leather & the sound of this magnificent V8 (last true maserati). truly enoyed the read ,bravo !

Another lovely article, I wait for each one with great anticipation, too bad they are so far in-between. But I presume that maintaining certain level of quality requires time.

Can you please share more info on the fact that Paolo Cantarella claimed the "boomerang" light design as his own. Sounds rather bizarre.

Cantarella had a habit of claiming personal responsibility for certain stylistic decisions. The Alfa Nuvola concept car's blue hue, the first Punto's vertical rear lights and this boomerang design were all reportedly due to his influence (among many other stylistic details). He - or his PR people - were not quite so keen on stressing his involvement in the brand killer that was the Fiat Stilo, however.

The press hailed Cantarella as a proper 'car guy' back in the day - some still do. But even disregarding his knack for self-promotion, there is no escaping the fact that he left Fiat a crippled company.

To be honest I was one of those that felt Cantarella was a genuine 'car guy'. Just lookin at the family of Coupe, Barchetta, Bravo/Brava, Punto and Multipla I can't help but think that this was probably Fiat's strongest lineup ever. Not to mention GTV/156/147 at Alfa (Lancias for pensioners comment aside).

But looking at what followed next, maybe the more logical conclusion is that the strong showing was mostly due to Fiat having not yet annihilated the massive amounts of talent that used to work there, and nothing to do with the Man.

Still claiming a design as his own (even if he suggested some of the changes) is very undignified in my book.

Cantarella enjoys a very good reputation outside of Italy to this day. And like you, I regarded Fiat's excellent '90s range as proof of his product nous, but as always, things are not as simple.

What has been confirmed though is that Cantarella was very hands on regarding styling matters - in a rather autocratic manner. So he ought to be credited with the Fiat Stilo's 'white goods' approach and Lancia's 'pensioner's cars', just as he's celebrated for Alfa's '90s renaissance and those earlier Fiats.