Despite its decidedly Teutonic soul, the Mercedes SL (R107) embodied the American way of life like few other cars of its era.

Built in Untertürkheim, made for Beverly Hills. If any one model in Mercedes’ history could rightfully be described as a naturalised American, it would have to be the R107 generation SL roadster.

Of course, the R107 was always intended to - and needed to - be a success in the New World, for the Land Of The Free had also become The Land Of The Convertible by the dawn of the 1970s. If any manufacturer was serious about producing sports cars or cabriolets and earn money doing so, it had better pay attention to satisfying the needs of well-heeled Californians more than any other clientele. For the United States was still significantly more affluent than Old Europe, which is why any motor car with hedonistic pretensions would have to be at least squarely aimed at America.

After the explosive growth in sales of European and, in particular, German cars in the US during the 1950s and ‘60s - some of which ought to be attributed to industrious importer, Max Hoffman’s efforts -, clouds began to gather on the wide horizon of the American market. In the wake of political activist, Ralph Nader’s study on motoring safety, Unsafe at Any Speed, an almost hysterical debate set in, which eventually culminated in a mooted ban on open-top vehicles. 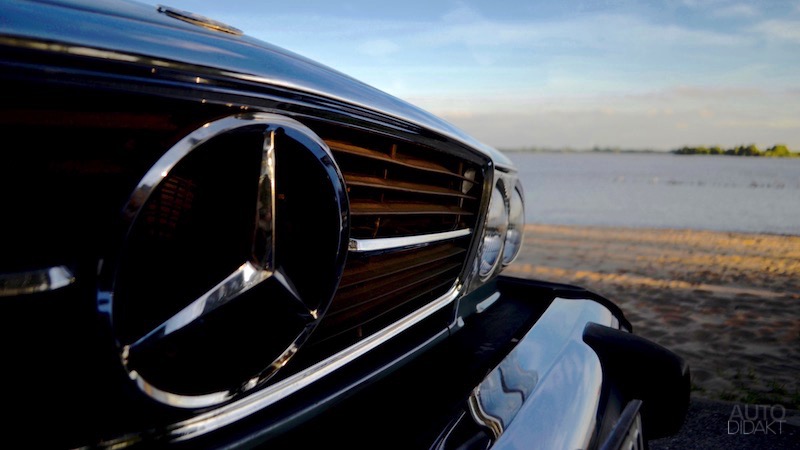 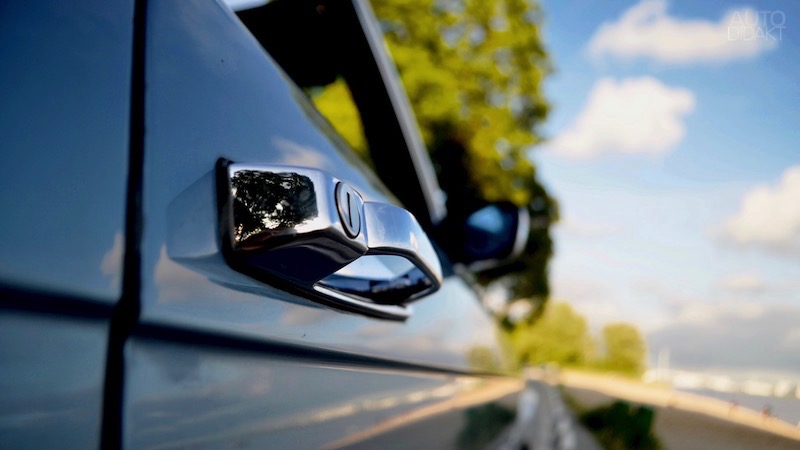 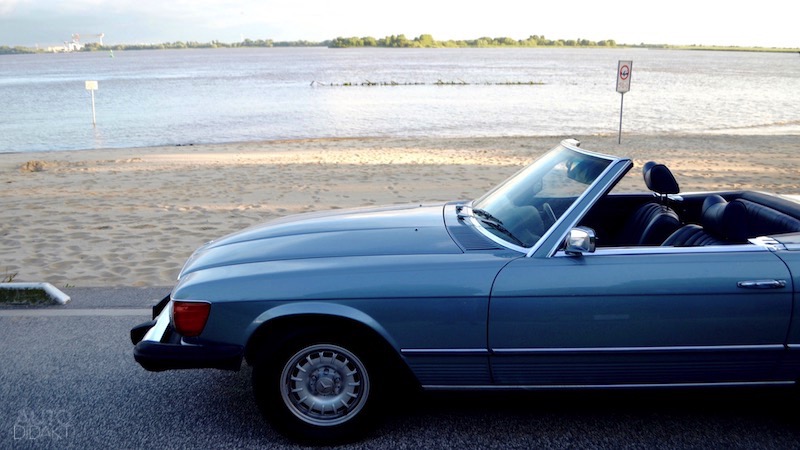 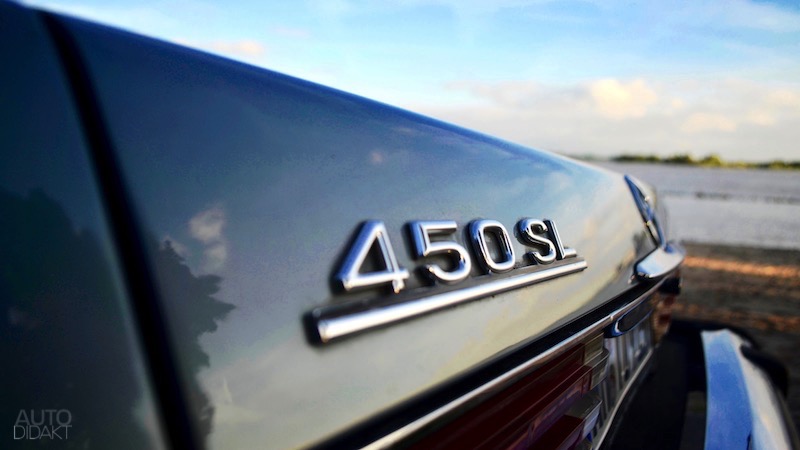 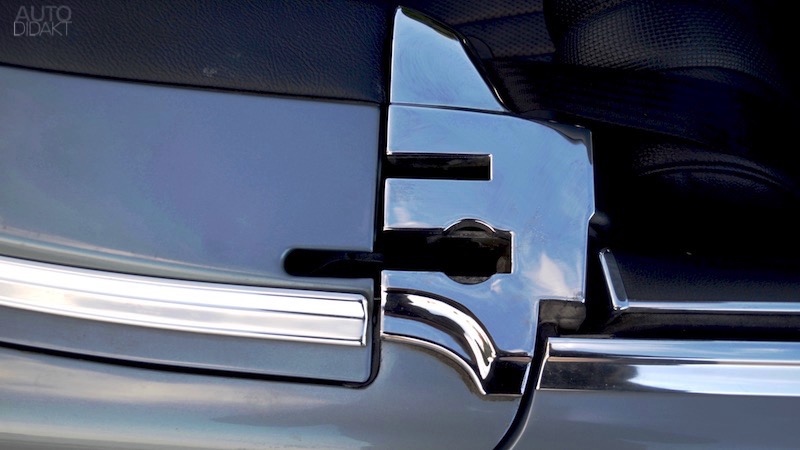 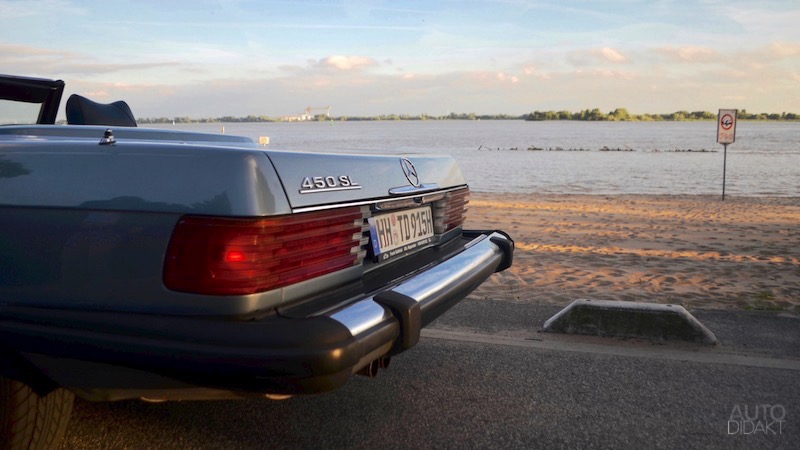 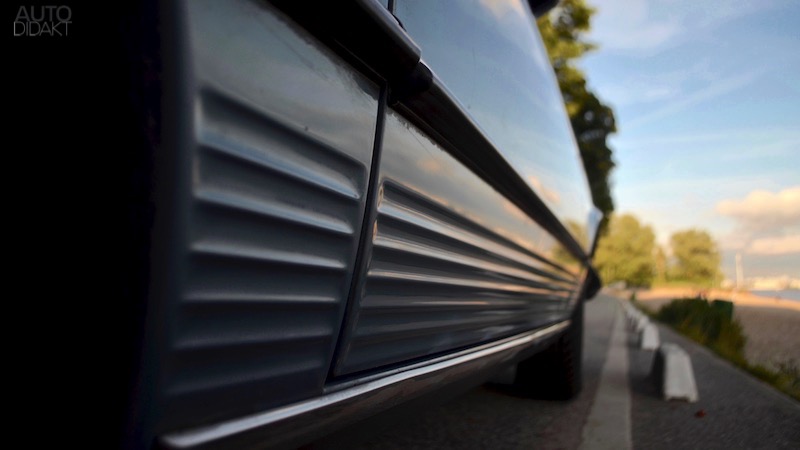 In the case of the Mercedes SL, whose biggest market was the United States, its convertible nature had become as good as a raison d’être: whereas the original 300 SL was indeed about being Super Leicht, its descendants were more concerned with exuding a Super Luxuriös air. In an age before seclusion from traffic and surroundings became the ultimate symbol of automotive might, this striving for superiority entailed the heightened sensuality of open-top motoring. Some closed-roof coupé, simply wouldn’t be an SL anymore, the superiors at Untertürkheim reckoned.

In a fashion that was emblematic for the Daimler-Benz spirit of the time, the Swabian engineers wouldn’t be deterred by the supposedly impending convertible ban. Instead, they went about devising the safest convertible in the world.

Employing a Targa-style roof - as pursued by British Leyland’s engineers for the competing Triumph Stag - was studied, but ultimately rejected by Daimler-Benz’ top brass. Almost stubbornly, Mercedes’ engineers chose the more laborious approach and produced a convertible that adhered to the advanced safety principles of Béla Barényi by adapting them according to the needs of an open-topped automobile.

Thanks to its very stiff A-pilar and glued-in windscreen, the R107 provided the required levels of safety in case of a roll-over crash, despite its lack of a roll-over bar. Thus, thanks to Swabian perseverance, diligence and obsessive attention to detail, freedom-loving, indulgent open-top motoring was saved from extinction.

A welcome side effect of Mercedes’ inimitable persistence regarding the SL was that the R107 would have this particular market almost to itself for the better part of two decades. If one was after a luxurious two-seater convertible, the only choice one was faced with was whether the SL should come with an inline six or V8 engine underneath its long bonnet. Jaguar, Porsche or BMW were not in any position to offer an alternative.

It could be argued that this dependence upon the US market also made itself apparent in the R107’s style. Charged with replacing Paul Bracq’s eminent design of the preceding ‘Pagoda’ SL was a team of stylists working under the guidance of chief designer, Friedrich Geiger, a man whose career at Daimler-Benz had started before the war.

Initially, Ferdinand Hellhage and Josef Gallitzendörfer, the stylists charged with finding the right shape for the new SL (the latter of which would play a pivotal role in the execution of Bruno Sacco’s ‘vertical affinity/horizontal homogeneity’ generation of Mercedes cars years later), got a bit carried away by the stylistic ideas and motifs that were prevalent in the US at the time. But pop-up headlamps, low, pointy frontal aspects soon gave way for a more sober design, which was no ethereal beauty like the Pagoda, but a rather ambivalent concoction, consisting of almost baroque splashes of grandeur sprinkled across a canvas of solid rationality.

Thankfully, said baroque quotient isn’t as high as on the contemporary W116 S-class, which boasted double chrome bumpers and a swollen variation of the traditional Mercedes grille. But the chrome’s appearance on the R107 isn’t as nonchalant as with the Pagoda, just as the pointy front indicators couldn’t ever hope to match the older car’s exquisitely simple headlight shape.

Yet it’s quite clear that the core of the R107’s design would’ve been deemed too sober without these embellishments. The plain, boxy, aerodynamically sound rear boot; the Pininfarina-designed ribbed tail lamps; the clean, delicately pointed profile; the slightly narrow track width and weak stance - these details on their own might very well have appeared to lack the je ne sais quoi for a car of this stature (and price). Hence, one presumes, all that chrome. And a hard top that was supposed to mimic the Pagoda’s solid roof, and actually looked almost as good.

Being among the last cars to be designed under Friedrich Geiger before Bruno Sacco took over as chief designer, the R107 can be considered the peak of Mercedes’ 1970s output and similarly betrays the stylistic weaknesses of this particular era. After the outstanding upright elegance of the 1960s’ Benzes, Mercedes felt compelled to go for a more up-to-date style for the new cars, influenced by what Bill Mitchell was doing at General Motors and, to a lesser degree, the Italian carrozzerie’s output. Combining these trends with the typical Swabian values of solid craft and quality didn’t lead to results that were as convincing as the generations of Mercedes cars that preceded and succeed them - which may or may not have been due to Geiger not being as in touch with the times as he’d previously been.

However, despite these criticisms, the R107’s strengths shouldn’t be pushed aside, for its transatlantic flavour means it may not be the ultimate word in Mercedesness, but instead possesses a charm of its own that, one might argue, its super-competently styled, super-clinical R129 successor lacks.

The R107’s somewhat indefinite, yet strong charisma also helped it remain relevant over its extremely long production period of 18 years. Not having been perceived as being cutting edge in 1971 had the welcome effect of this SL still appearing relevant by the late ‘80s.

Speaking of the decade following ‘the decade that style forgot’, it must be stressed that the effect the R107 had on those ten years couldn’t possibly be overestimated. If there was a cypher for debonair automotive luxury in the ‘80s, it would have read R107. And this was also due to the Mercedes’ overwhelming success at the movies and on television.

Bobby Ewing, Dallas’ most popular inhabitant, drove an R107. Axel Foley, aka the Beverly Hills Cop, chose an R107 to casually sit on in that movie’s poster. But no other R107 was even remotely as influential as the black example (running on Fuchs ‘Barock’ rims and whitewall tyres) that Julian Kaye, the American Gigolo, used to drive around Beverly Hills, the Pacific Coast Highway and Palm Springs in Paul Schrader’s film of the same name.

American Gigolo is pretty much a blueprint of the lifestyle ideals of the ‘80s. Julian Kaye lives in a flat as aseptically cold as it is exquisitely furnished. He collects everything worthy of a man about town in the ‘80s: he’s got the high-class hi-fi unit, the Armani suits, the fitness gear - and the Mercedes SL, of course. In due course, he loses all of it, which climaxes with him destroying first his sterile flat before he demolishes the R107. Only catharsis that comes at a price is worth the effort, after all.

Thus, a car first unveiled in 1971 - the year that a British Education Secretary becomes known as ‘Thatcher The Milk Snatcher’, the year of Stanley Kubrick’s Clockwork Orange - was given a new lease of life as the symbol of desirability and affluence for the decade of Thatcher, the ‘Iron Lady’, and The Secret of My Succe$s (which is a semi-forgotten yuppie comedy starring Michael J Fox).

Even though not exactly timeless, the R107’s baroque lustre fulfilled the glamour criteria, just as its convertible design enabled the requisite ostentation. But its rational qualities - the sophisticated engineering and quality, as exhibited through the styling - pandered to the (wannabe-) connoisseur’s belief that all that snobbery rested upon a higher understanding and appreciation of all that’s true, good and beautiful. That the R107’s form betrayed the inherently conservative striving for quality that was at the core of its creation process is the reason why Julian Kaye drove around in the Mercedes, rather than some targa-roofed Ferrari. A high-class gigolo wants to exude class without keeping too high a profile. A regular yuppie wants to exude exquisite taste and wealth, but he doesn’t want to be mistaken for a pimp.

The conservative flashy Swabian Californian SL’s inconsistency actually is its great strength. It’s what helped it adapt to a Zeitgeist that’s the diametric opposite of the one during which it was conceived. It’s also what’s turned it into an icon.