NOTHING TO SEE HERE!
by Christopher Butt
(comments: 6)

Nothing To See Here!

The inconspicuous, discreet, delicate Mercedes-Benz 500 E (W124) is the exact opposite of the kind of motor car it helped establish.

Until recently, when VW Tourans and Toyota Prius Plusses joined the cues at the airports and train stations of Deutschland, a popular aphorism in Germany said: ‘If I want to drive around in a Merc, I’ll get myself a taxi’. Albeit intended to be derogatory in nature, it’s actually a case of popular wisdom acting as the most effective of endorsements. Back in the days of self-dissolving bodyshells and capricious carburettors, any German taxi driver with but a minimum of self-esteem was faced with the choice between two automobiles to go about his business: it would have to be either the newest Daimler or a run-out Benz. Nothing else would do.

The last of the definitive Benz taxis took the form of the Mercedes W124 E-class. Once a few glitches upon its introduction in 1984 had been taken care of, it proved to be the proverbial Swabian clockwork, just like its W123, Strichacht, Heckflosse and Ponton predecessors. And as far as its shape is concerned, the W124 could even be described as the culmination of the brand’s core values of diligence, attention to detail and circumspection. Values of substance, rather than superficial gestures.

Like all Mercedes models of the 1980s, the W124 suffered from the fact that, although familiarity doesn’t necessarily breed contempt, it certainly facilitates indifference. This means it wasn’t seen as a design high point, but as just another Vertical Affinity/Horizontal Homogeneity Benz. And its propagation among taxi drivers, middle management and World War II veterans didn’t help its case either. Like having Soupe aux truffes for lunch every day, the Vertical Affinity/Horizontal Homogeneity Mercedes models’ excellence was quickly taken for granted and eventually almost forgotten, due to sheer ubiquity.

Which makes the 500E’s case all the more astonishing. Apart from slightly flared wheelarches, slightly brighter headlights and a superior badge on its boot lid (a delete option), it sported exactly the same shapes, courtesy of the Vertical Affinity/Horizontal Homogeneity designer troika of Bruno Sacco, Peter Pfeiffer and Josef Gallitzendörfer, as a beige 200D taxi or pine green town mayor’s 230E. And yet this particular W124 is actually a bonafide thoroughbred.

In a sense, the 500E could be described as the saloon version of Mercedes-Benz’ groundbreaking R129 generation SL roadster. Unveiled two years prior to the 500E’s market introduction, the R129 not only set the engineering and styling standards for a generation of Mercedes models, but was actually heavily based on W124 hardware, to which an all-new, highly advanced, 326 hp, five litre V8 engine was added. Equipped with this engine, in addition to aforementioned visual tweaks and upgraded brakes, the run-of-the-mill E-class was thus turned into a serious Porsche-Schreck - even though the biggest shock to a great many drivers of Zuffenhausen’s finest sports cars may have been that it was the face of such an unassuming Mercedes that just wouldn’t leave their rear view mirror.

On another level, the 500E actually was the exact opposite of a threat to Daimler-Benz’ fellow Swabian neighbour. It was more of an aid programme, some might even argue. For in the early 1990s, Porsche was on the brink of a financial catastrophe of possibly fatal proportions, thanks to some questionably product decisions and a recession that hit purveyors of luxury goods particularly hard. In an act of what some describe as Swabian brotherliness, Daimler-Benz AG therefore decided to outsource assembly of the 500E to Untertürkheim. 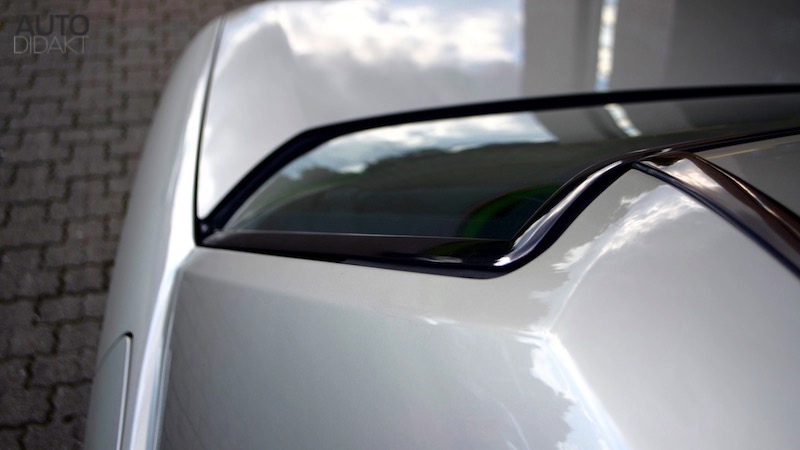 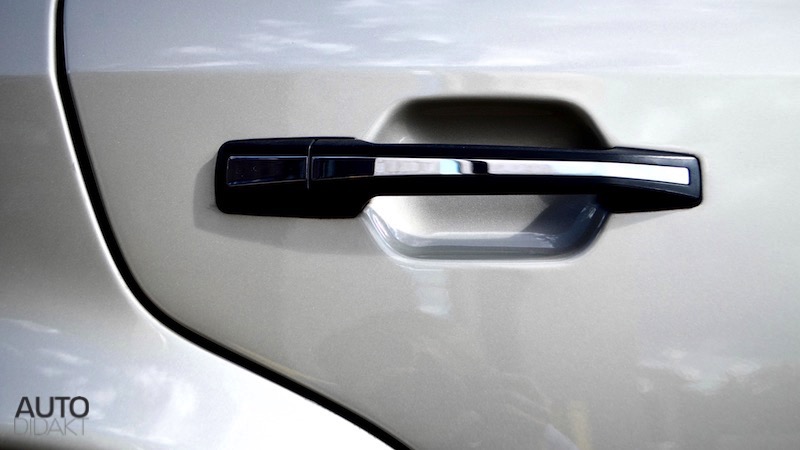 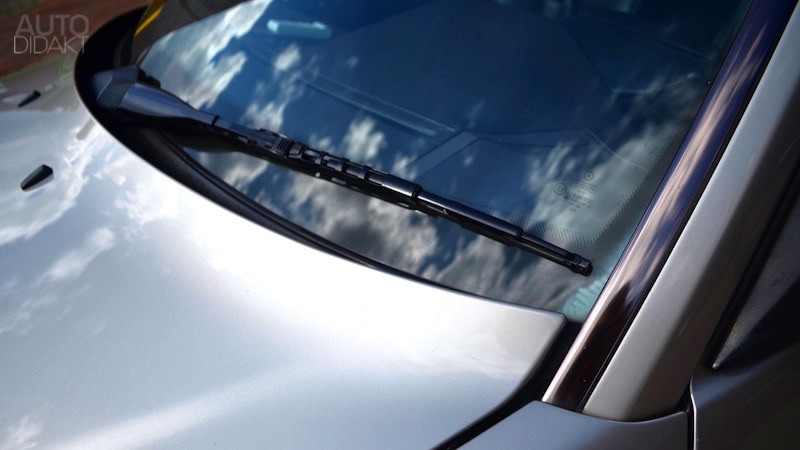 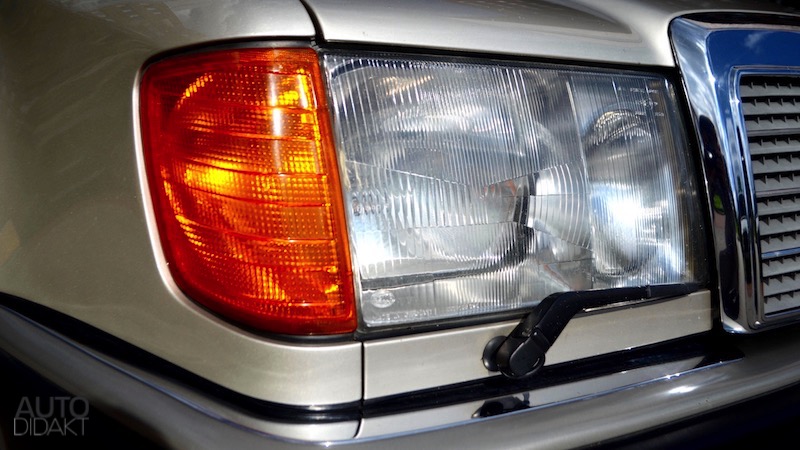 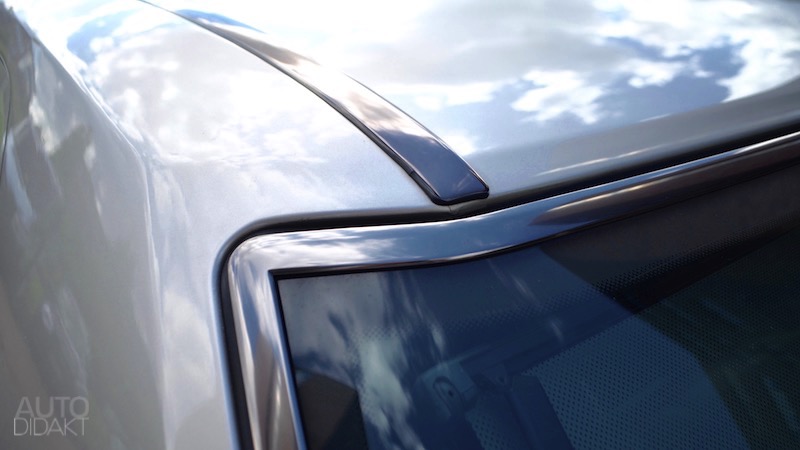 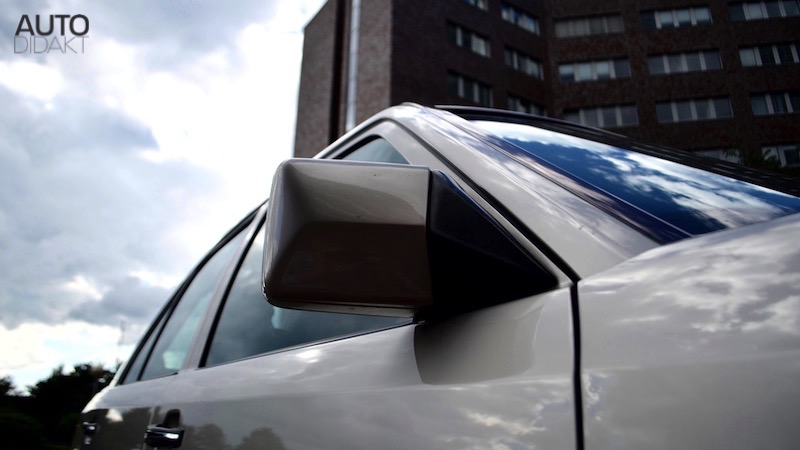 Even though these cars’ build quality reportedly doesn’t quite match that of their wholly Sindelfingen-built brethren, the Swabian Connection certainly adds to the allure of these cars, even though they most certainly don’t require such a boost. For even without giving any thought to legendary car makers forging unlikely alliances, the 500E illustrates the qualities hidden underneath W124’s continuing ubiquity.

Particularly in Mopf 1 guise (with the lower side plastic cladding Bruno Sacco had always envisaged for this E-class, but without the slightly faddish white indicators and oh-so-‘90s colour schemes of the Mopf 2 cars), W124 betrays all the quality, sophistication and subtlety that distinguished all Vertical Affinity/Horizontal Homogeneity models.

The surfacing alone is a master class in craftsmanship: the radii are substantial, but not so heavy as to give any impression of being leaden. The creases are subtle, but expertly placed to avoid any visual tedium as superficially simple a form as W124’s could evoke. This becomes particularly apparent when studying the c-pilar, at whose base a crease arches upwards, only to bend abruptly towards the rear. This detail not just adds visual stimuli - it is also an homage, whether deliberate or not, to another highly sophisticated German saloon car design: Claus Luthe’s NSU Ro80.

Another trait these two cars share are their superior drag coefficient values. This probably wasn’t so much due to any single crease, but a plethora of thoughtful stylistic solutions, such as the radii of the boot’s outer edges, which gained their characteristic rounded-off shape for aerodynamic reasons. These outer edges also act as the border of the delicately arched surface that extends from the sides of the roof, right across the wings of the rear window to the boot lid. This is a detail that would have been deemed unnecessary in lesser hands than those in charge of W124, but as were speaking of Mercedes-Benz under the stewardship of engineer, Werner Breitschwerdt, there obviously was an understanding that it’s actually the subtleties that sell the idea of substantial quality.

The enormously hard-wearing strips of anodised metal (Mercedes’ occasional chrome substitute) around the greenhouse discreetly reinforce the impression of superior quality of materials - and, thanks to their mother-of-pearl lustre, act as a bit of unusual and hence interesting brightwork.

The pervading sense of rational excellence continues on the W124’s inside, which boasts a cabin that’s ‘standard ‘80s Mercedes fare’ in the best sense of the term. Rather then being designed to impress, it impresses by being so well though-out. The instruments are the same as on any other Mercedes of that era, as are the controls - and why shouldn’t they? Just because this is such a fast beast of a saloon, rather than a humble, sturdy diesel?

There are, of course, differences between a humble, sturdy 200D and the thoroughbred 500E, but these are small and subtle, rather than instantly eye-catching. The single seats at the rear, for example, wouldn’t be found inside any W124 taxi waiting in front of Stuttgart Echterdingen airport. Neither would the strips of burl wood, which - although by no means appearing to be hand-crafted in the way of similar decorum of British origin - do add a bit of warmth and a touch of class to the otherwise extremely sober cabin design. 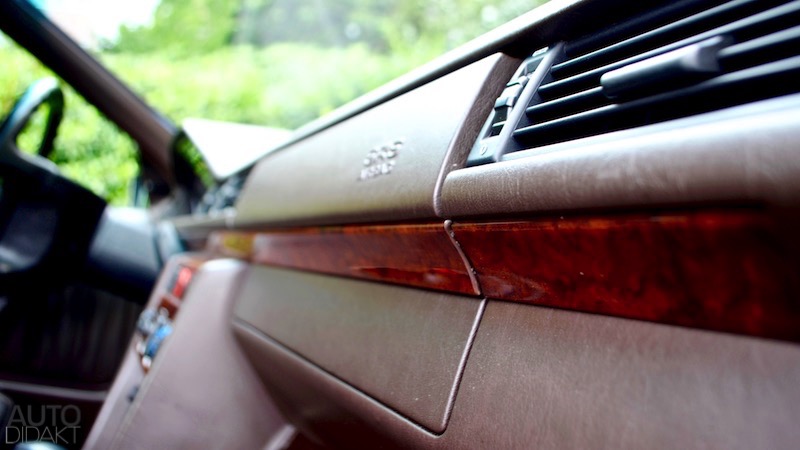 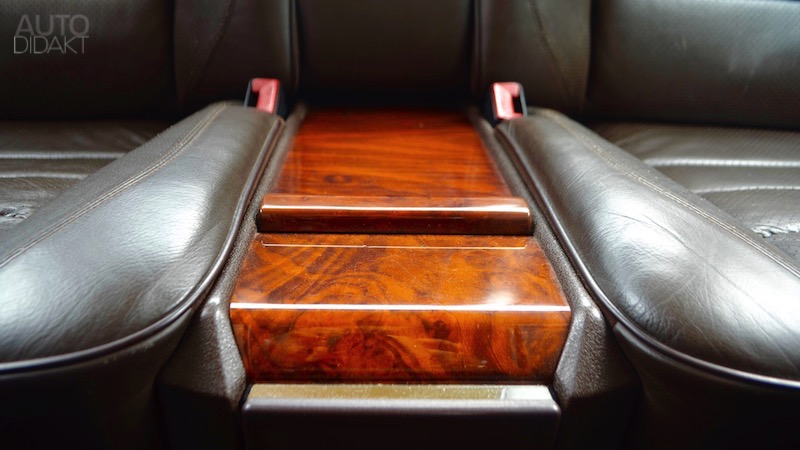 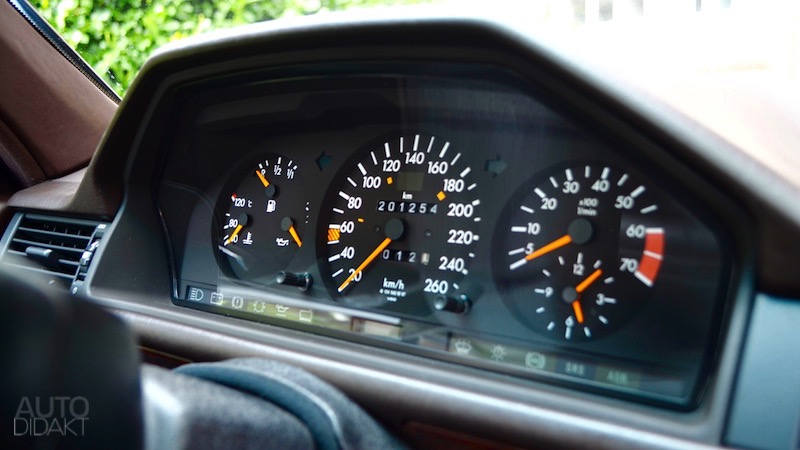 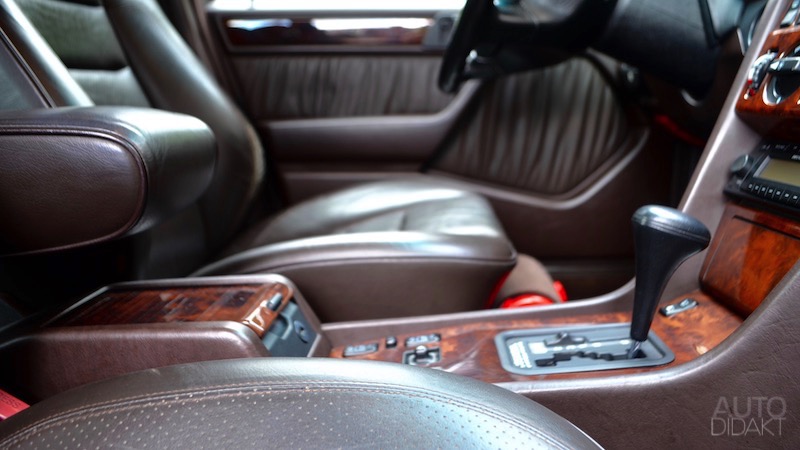 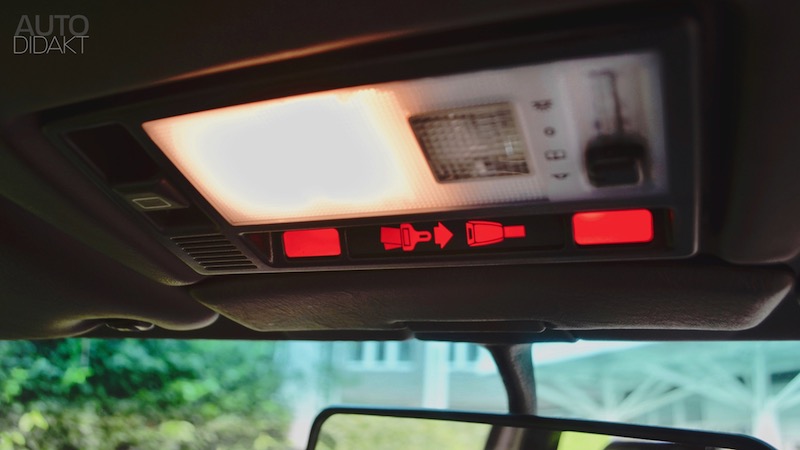 The leather (ruched on the door cards) feels sturdy and supple, rather than Connolly fragrant and delicate, but that’s consistent with the overall impression of competent, instead of romantic luxury. Swabian luxury. As it should be.

Anyone looking for metal effect buttons, conspicuous stitching or excessive badging will be sorely disappointed. This is a car that doesn’t feel obliged to remind its owner that he’s driving something rather special. Even its engine note upon start-up is discreetly sonorous, rather than attention-seeking.

All of which means this wouldn’t be the right kind of car for a Babo.

Babo is a word of Bosnian origin, as well as a variation on the Turkish term Baba - both meaning ‘father’. Among Germans of a certain ilk, striving for some form of gangsta lifestyle, Babo simply means ‘boss’. The Babo stands for everything that’s aspiration to these people: power, greed, ostentatiousness, conspicuous consumption, unashamed vulgarity. The Babo lifestyle is all about showing off, reviling social inferiors and wastefulness for the sake of it. And Babos just love fast, loud, aggressive Mercedes saloons, preferably of the variety that has undergone the Affalterbach treatment.

Putting a Babo inside a 500E, the car that, in a sense, paved the way for his beloved CLS 63 AMG, would probably result in utter disinterest. To a Babo, the king among W124s would be just some old taxi with a strange rear bench.

Another outstanding and insightful commentary. Interestingly, when I try to explain to those that know a little MB, but don't know what the essential feel of the E500E is, I have always told them "It is really a 4 door 129 in execution and character" You got that, just as you always seem to "get it"
I hope you don't mind, but we have linked this to a thread on the superb 500eboard.com where it is well appreciated.

thank you for having stopped by.

You may be interested in learning that there's a chance that I may have a cracker of a story on R129 in the pipeline. The final flawless Mercedes design certainly validates careful attention.

Christopher - your prose is so well constructed --- so effervescent. You are able to put into words what I have thought for many many years but have not been able to articulate nearly as eloquently as you. Indeed -- I agree -- today's Mercedes and AMG products are so "unashamedly vulgar."

One could excuse the vulgarity, if those cars had a sense of humour to them. Unfortunately, they're just mean and bereft of any proper charm.

I had the pleasure of owning a W124 1994 E500 which I used as a daily driver. During this time I also owned an SL500. If any anything, my experience of the saloon was that its steering was sharper and more communicative than than of the roadster. It is a car I regret selling. Whether it was a subtle Q car, an estate, convertible, limo or more particularly my favourite- the exquisite coupe, the execution and underlying quality of the 124 range has not been matched since.

Did you ever get around to writing your "cracker of a 129 story"?

As it turns out, my main source for the R129 story proved itself to be far from reliable. Regrettably, I haven't been able to talk to any of the actual main protagonists (such as Mr Sacco or Hans-Dieter Futschik) so far either. That cracking R129 article will hence have to wait a little longer.

So for the time being, I must disappoint you - albeit offering some consolation by way of letting you know about this exceptionally fine series of R129 photographs.

Frolische Weinachten. ( Sorry no umlaut. Can't find them on my laptop) Chris.

No umlauts but correctly spelt this time.