With divorce proceedings between Opel and General Motors in place, now would be a good opportunity to remember happier times - as vividly demonstrated by the Opel Rekord D Coupé.

Family ties can be a burden. The people of Rüsselsheim am Main, a small city near Frankfurt, Germany, know this too well. For decades, they have been completely dependent upon the mercy of General Motors. The fate of the cars from Hesse was ultimately decided on the shores of Lake Michigan, no matter what. Naturally, this kind of set-up was always bound to create tensions between the mighty General and his European charge.

‘Back in the days of the German Democratic Republic, the commies were already using two-ply toilet paper - ‘cause one copy would always be sent to Moscow!’ This was a rather popular joke about the nature of communist East Germany’s apparatchik system, back in the day. And while it remains unclear whether or not any used toilet paper was ever sent from Rüsselsheim to Detroit, the tune of the accusations floating between Opel and GM has been rather similar for quite some time. Even if the accompanying rhythm was of the arch-capitalist, rather than communist kind. 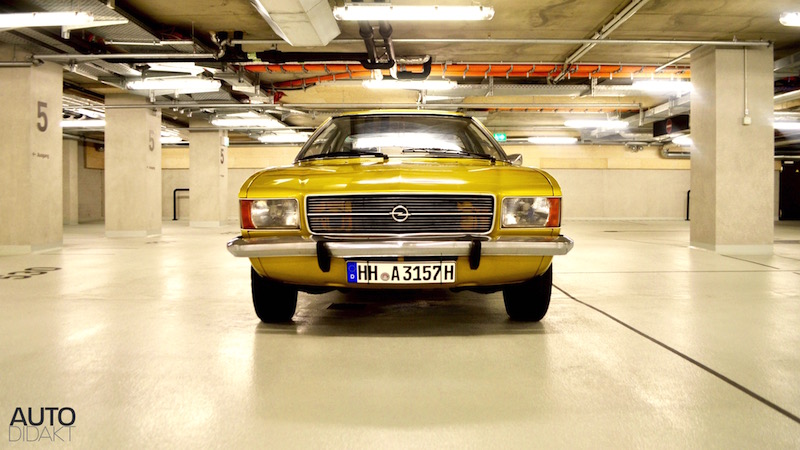 And yet the close alignment with the American giant didn’t always bear sheer misery. Far from it. In fact, Opel benefitted greatly from the parent company’s know-how in the post-war years. This became particularly apparent in the brand’s design.

The Americana flavour of quite a few Opel models of the ‘50s and ‘60s was in tune with the times, rather than decreed by the General, by the way. Even proud Swabian purveyors of automotive excellence, Mercedes-Benz, saw fit to add fintails to their saloons at the time (albeit disguised as ‘reversing aids’). GM’s influence on Opel’s design was therefore of a considerably more substantial nature.

Car design as we know it, lest we forget, is an American invention. And the first manufacturer to open a dedicated, professional design studio of its own was none other than General Motors. Training, procedures, structures: all those elements of car design were either invented in Detroit, or professionalised there, with men such as Harley Earl, the very first chief designer in automotive history, in charge.

The Americans were generous when it came to sharing this enormous expertise with their European subsidiary, which led to Opel being the very first car company to establish modern design facilities in the Old World in the 1960s. Moreover, a brisk transatlantic exchange of styling personnel was instigated.

One of those designers sent from Detroit to Rüsselsheim was Charles Jordan, or ‘Chuck’ to his friends. Being a GM man through and through, Jordan had been heavily involved during all the different stylistic periods of his employer, either executing or shaping the trends that were set in Detroit and then adapted by the rest of the automotive realm later on. With the (in)famous ’59 Cadillac Eldorado, Jordan even penned the ultimate fintail landyacht, just before his boss, William (‘Bill’ to his friends) Mitchell, created the sheer look edict of modern, unadorned sleekness, which Jordan then implemented with similar aplomb.

Jordan, who eventually succeeded Mitchell as GM design boss in the 1980s, would stay with Opel for three years. Three good years, it must be said.

The Opel Rekord D stems from this period. And not only did it continue the success of the brand’s mid-size saloon range, but actually modernised it (at least visually) in careful, but effective ways.

This Rekord was no shrunken yank tank anymore, but mixed the Italianate trends prevalent at the time with a sprinkling of American bravado - on the basis of Teutonic rationality.

The Rekord’s appearance is therefore far from playful, despite the discreet Coke bottle hips, yet far from boring, either. This was due to the dynamic, forward-tilted front end, which also betrayed the Rekord D’s last remaining traces of Americana, courtesy of its stripped-down interpretation of a traditional US-style grille. Similarly modern and minimalistic were the sharp seams on the bonnet and flanks, as well as the boot and c-pillar. In addition to this, there’s also the crease at the centre of the boot lid, which one can barely spot, under certain light conditions and from the right angle only. This kind of detail adds to the Rekord Coupé’s design quality on an almost subliminal level, and speaks volumes about the care and attention that went into the styling of what was still a mass-market car.

Far more obvious are two other details, which are aimed at underlining the coupé’s slightly decadent status, which certainly exceeds that of a mere two-door saloon. First, there is the frameless door windows; second, the twin individual rear seats. These kinds of features have more than a faint whiff of executive class to them.

And this is not even where the differences between two- and four-door Rekords end. For the saloon’s rear lights are indeed of the somewhat austere kind, which led to the coupé being fitted with a shield and rear light arrangement in the style of the large Opel Diplomat. This resulted in a slightly awkward clash of the sheetmetal’s modern, contoured shapes with old-fashioned, angular chrome accents. Be that as it may though, it certainly saved the coupé’s rear aspect from suffering from the same kind of visual boredom as the saloon’s.

More disappointing, it has to be said, is the cabin’s styling, when compared with the exterior’s overall appearance. It actually is neither as staid, nor as cobbled together from individual components as a fair few competitors back in the day. And yet it is also aeons removed from resembling modern, let alone avantgarde design. Only the graphics connecting the door card with the dashboard resemble any such attempt, which suggests that Opel’s designers were capable (maybe even willing), but ultimately unable to push the modernist envelope too far.

Inevitably, the Rekord D Coupé was available with an optional vinyl roof, which instantly made it appear considerably less smart an automobile. But Opel wasn’t willing to alienate any customers - and a lot of customers they had indeed, as Opel was West German market leader back in those days. This meant the cars from Rüsselsheim had to cater to the requirements and desires of quite a disparate demographic. So while the sharp lines would have been an easy sell to a dashing, cravat-wearing bachelor with huge sideburns, it would probably have taken the added stateliness of the vinyl roof to make the Rekord D Coupé palatable to the odd middle-aged head of department and war veteran, who’d view anything overly modern with scepticism, if not outright dismissal at first.

The succeeding Rekord E eventually turned out a lot more stuffy than its predecessor, and would certainly have been more appealing to the war veteran than the bachelor. Was this due to the fact that Chuck Jordan was breathing the air of the Land Of The Free once again by that point? Or was it the overall timid atmosphere in the aftermath of the oil crisis that had robbed the Rekord off its sleekness?

Without question, the Rekord D Coupé remains one of the highlights of Opel’s post-war history, albeit a discreet one. It stands for a time, when the brand with the lightning logo was ahead of VW not just in terms of sales, but also demonstrated the high level of its design competence with a vengeance - not just through the production vehicles, but also concept cars, such as the Opel CD. This kind of design know-how was usually the domain of the Italian carrozzerie in those days, but Opel was well ahead of the rest of the industry. Thanks to the help from Detroit.

Now that the ties between Hesse and Michigan are about to be cut off, it would appear to be appropriate to remember that there was a time when both American parent and European subsidiary benefitted greatly from one another. As exemplified by this underappreciated, rather lovely Rekord Coupé.

Hi Christopher. I've spent a very enjoyable couple of hours this afternoon reading your excellent back-catalogue of articles. The Opel Rekord D was a favourite of mine. Even as an 11 year-old, I admired its quiet elegance and regarded it as a rather better design than its slightly louche and brash British cousin, the FE Vauxhall Victor. (I was a rather precocious child!) The flush-fitting light units front and rear were better resolved than the Victor's, particularly at the front, where the British car made do with standard small rectangular units surrounded by a rather crude looking bright bezel:

(I hope that embedded photo works.)

As your photo above shows, the Rekord instead had close fitting custom made units of a more appropriate size.

Regarding the rear lights, I must refute any suggestion that the standard Rekord saloon's unadorned items look boring. On the contrary, the flimsy looking pressed metal trim added to the coupé concealed the quality of of the underlying fit and, as you say, brought a clash of styles to the rear end.

I don't think I've ever seen a Victor in the metal - what a peculiar design this is: very much how one would expect a middle England take on American tropes of the time to turn out.

Opel design were in a class of their own when the Rekord D was created. One shouldn't forget that their Rüsselsheim facilities were the most advanced in Europe for quite some time, not to mention the kind of creative and craftsmanship input that was shared by GM's Technical Center, which was the industry standard in those years. Numerous designers that would later on play significant roles at BMW and Porsche in particular had previously attended 'GM schooling' at Rüsselsheim. All of which is unfairly forgotten or ignored today.

I loved the Monza, with its magnificent five-spoke alloys. There is so much about it that can be traced to the two-door Rekord.

This Rekord was also seen in South Africa, Belgium, and Switzerland with a quite nice quad light conversion.
https://s36.wheelsage.org/picture/g/gm/ranger/gm_ranger_1.jpg