A MATTER OF SCOPE
by Christopher Butt
(comments: 2)

A Matter Of Scope

The original Range Rover is not simply a sublime piece of industrial design - but a formidable symbol of changing standards.

First of all, one point needs to be made, clearly and emphatically: The Range Rover was not the first SUV. There were certain American models combining off-road capability with creature comforts before the British 4x4 classic arrived on the market in 1971. Moreover, the Range Rover possessed no sporting pretensions whatsoever, which means the ’S’ in that most dreaded moniker may be dropped immediately. Coining the Range Rover a utility vehicle, however, would be perfectly apt. For that is exactly what it was, and what it was designed to be. A vehicle for the farmer expecting some creature comforts when on the road. Nothing more, nothing less.

In that context, the very question of what constitutes design comes to the fore once more. For the original Range Rover is generally not perceived to be a ‘designer’s car’, but an automobile designed by engineers. As the engineers who created the Range Rover were none other than British legends in the field, Gordon Bashford and Charles Spencer ‘Spen’ King, the notion that this archetypical British motor car was the result of sober, technical considerations and sober, technical considerations only does indeed suggest itself. And yet this argument would be as shallow and superficial as the insinuated stylist’s demeanour from which the Range Rover supposedly remained entirely unaffected.

So it is with the greatest respect to Bashford and King that any observer with intact aesthetic faculties must come to the conclusion that the Range Rover has not just been designed, but styled as well. For its simple, clean, yet expressive graphics are clearly not some arrangement cobbled together by an unassuming mechanic at the prototype manufacturing department. The round headlights, framed by the black grille (with vertical slats), which is in turn bookended by rectangular indicator lights, form a simple graphic indeed - but this is a case of simplicity bourn out of deliberation,  rather than necessity or even thoughtlessness. The tall, black, vertical door handle was also not to be found in Rover’s parts bin, but acts as a deliberately and strikingly simple, yet well thought-out solution that happens to be more visually pleasing than it is practical.

This theme of simplicity betraying considerable stylistic sophistication extends beyond mere graphics. For the very ‘straightness’ that has been a Range Rover design staple for some decades now is not what it purports to be. In fact, not a single line on the Range Rover is truly straight. The crease along its sills is almost straight, but not quite, and acts as a centreline to the Range Rover’s profile. The other lines really are increasingly bowed arcs, the further away from that centreline they are placed. This is only obvious on the roof and bonnet, however. 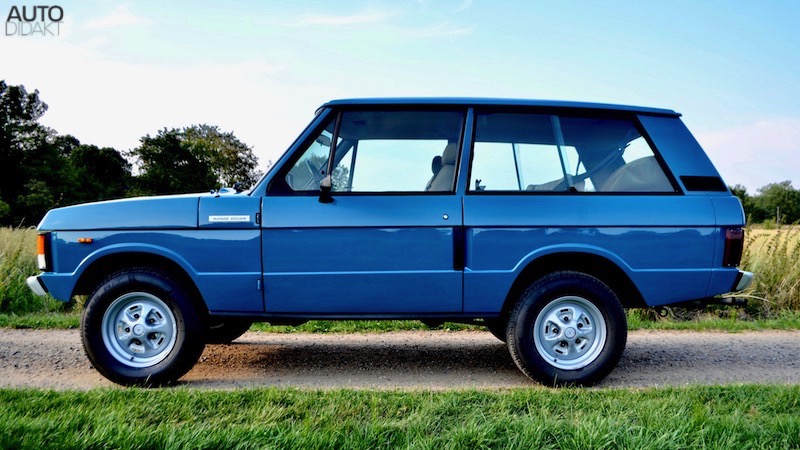 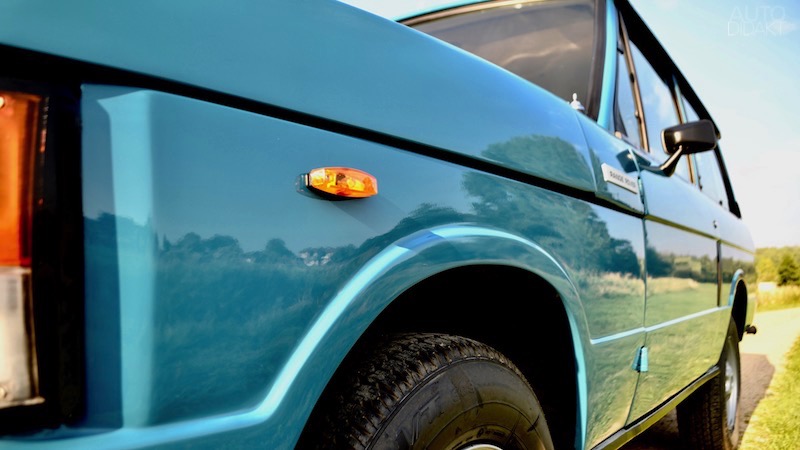 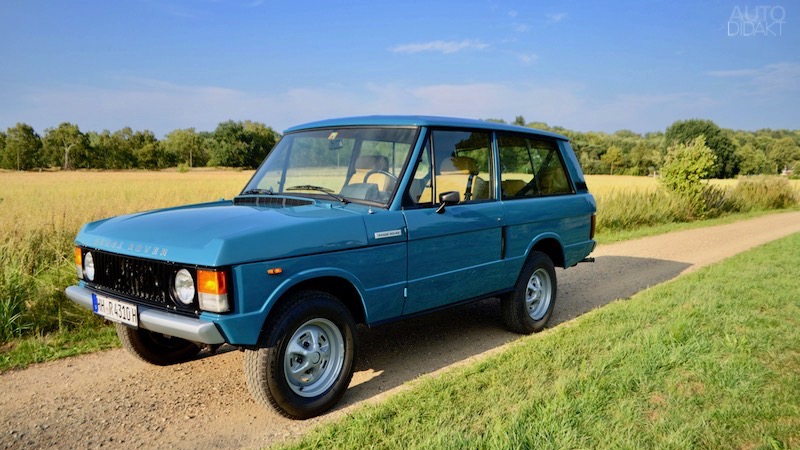 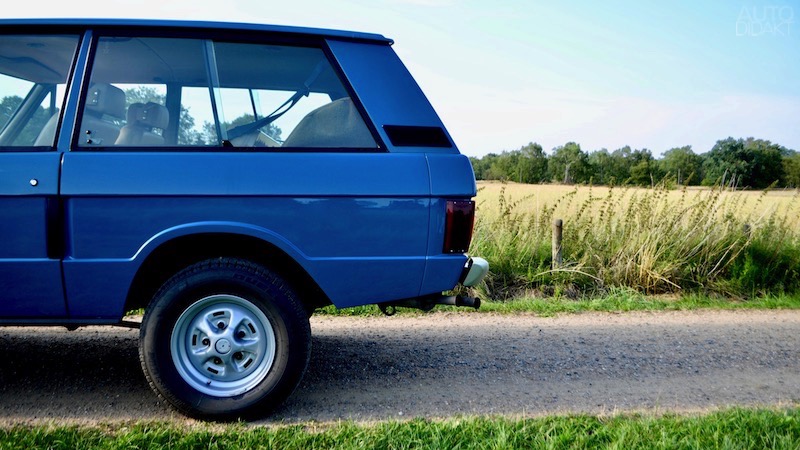 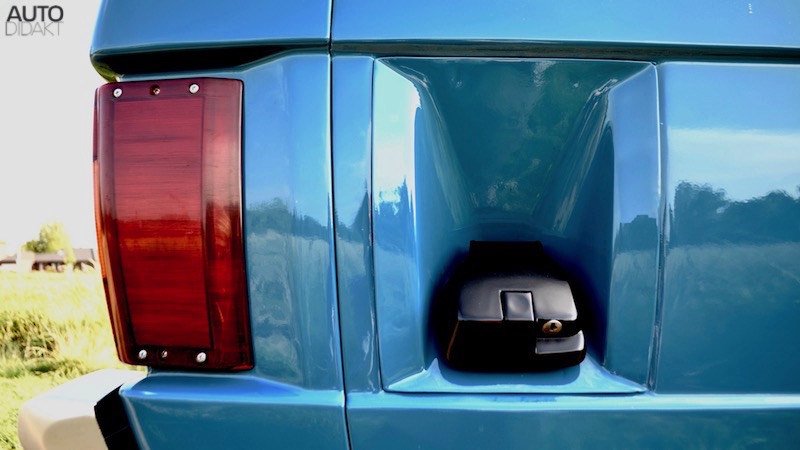 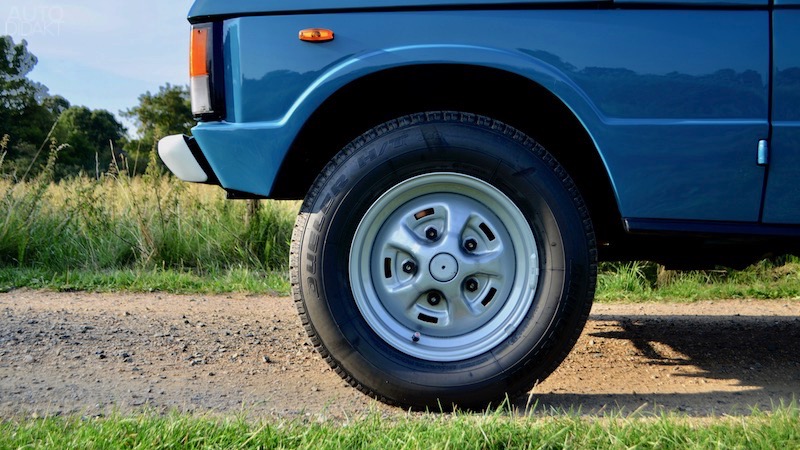 Not just enthusiasts of Dieter Rams’ body of work appreciate the fact that simplicity must not come to the detriment of nuance and detail. The Range Rover is another case in point. It also happens to illustrate what can ideally be the outcome when the sophisticated technical mindset of engineers such as Bashford and King interacts with the flamboyant, stylistically adventurous bearing of Rover’s then chief designer, David Bache. Rather than some rotten compromise, the Range Rover hence combined the best of both worlds: The clean practicality envisioned by engineering and the sophisticated flair styling can ideally contribute to any design.

Without these qualities, it remains doubtful if the Range Rover could have created as long-lasting and resonating a legacy as it did. Whereas the Land Rover (Defender) evolved little over the 68 years it was in production, the Range Rover’s journey took a dramatically different turn. This gradual evolution from sophisticated utility vehicle into bonafide luxury object - whether one appreciates it or not - would not have been possible without the finely wrought, almost subliminal refinement and finesse Bache had added to the basic concept. One only needs to imagine the ridiculousness of a Land Rover fitted with wood and leather to understand that such accoutrements necessitate a basic sophistication in order to appear convincing, rather than some afterthought. 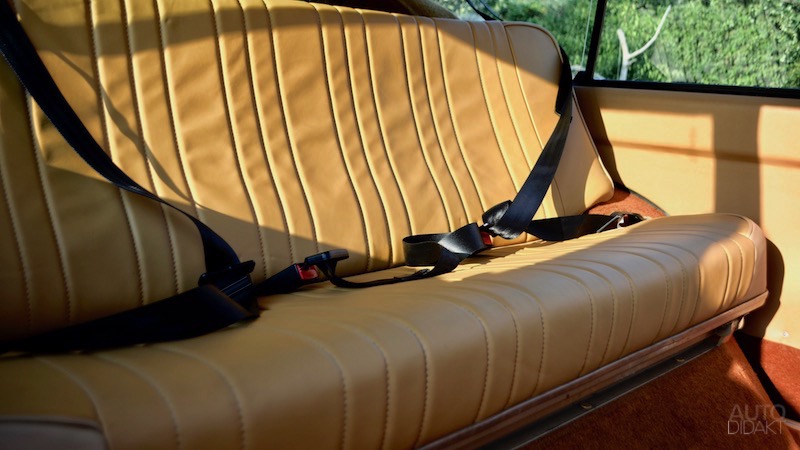 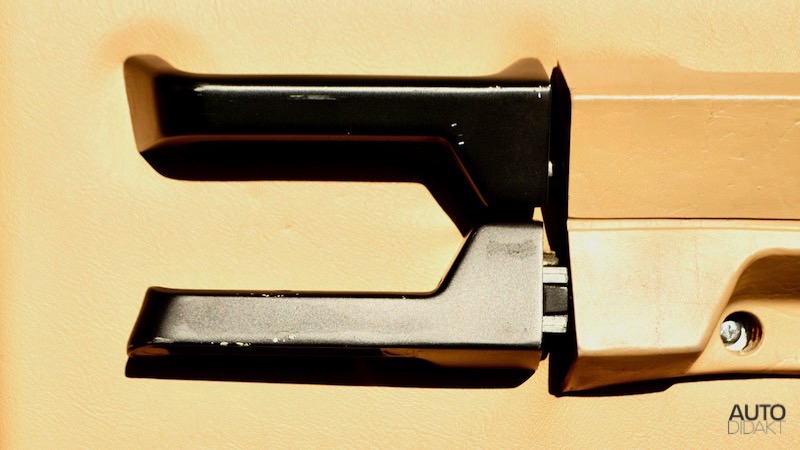 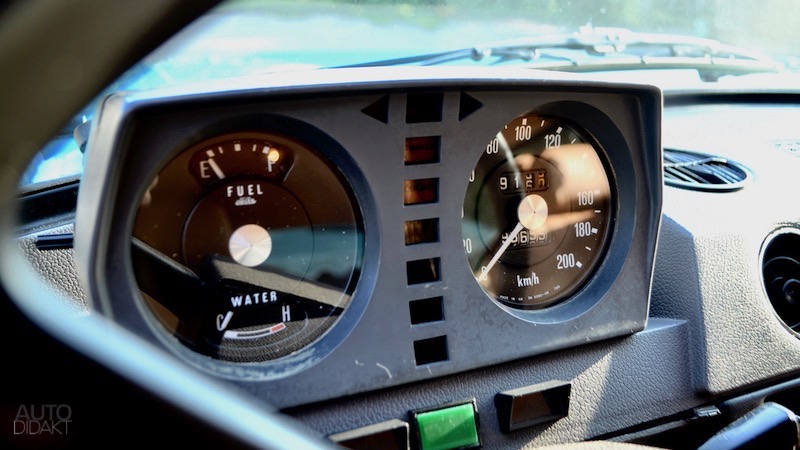 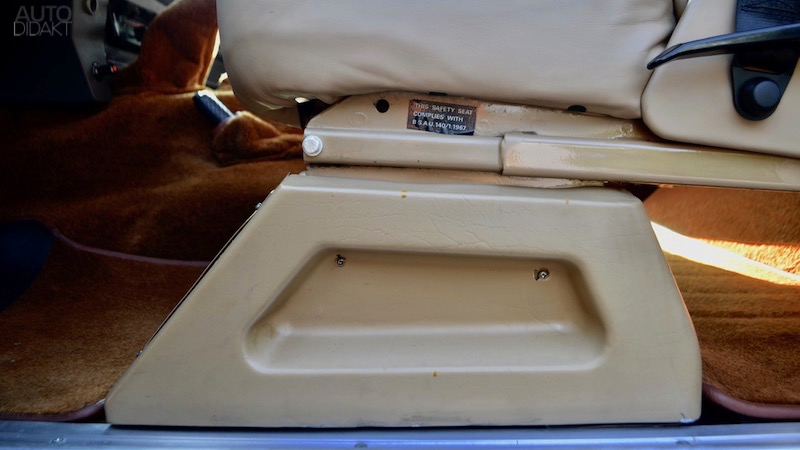 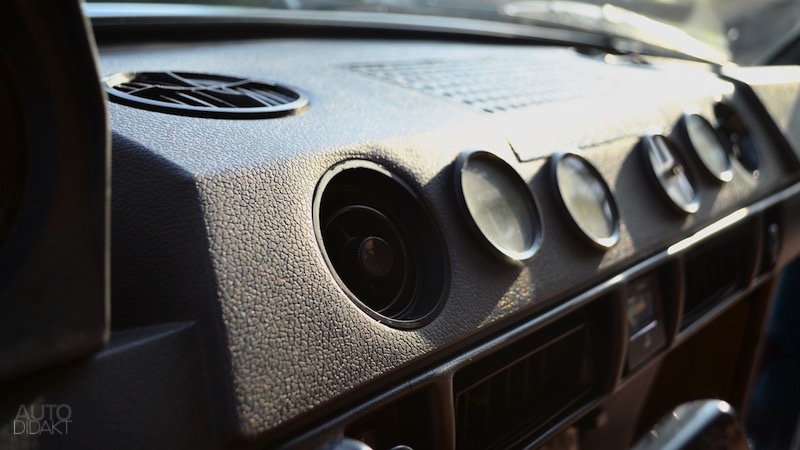 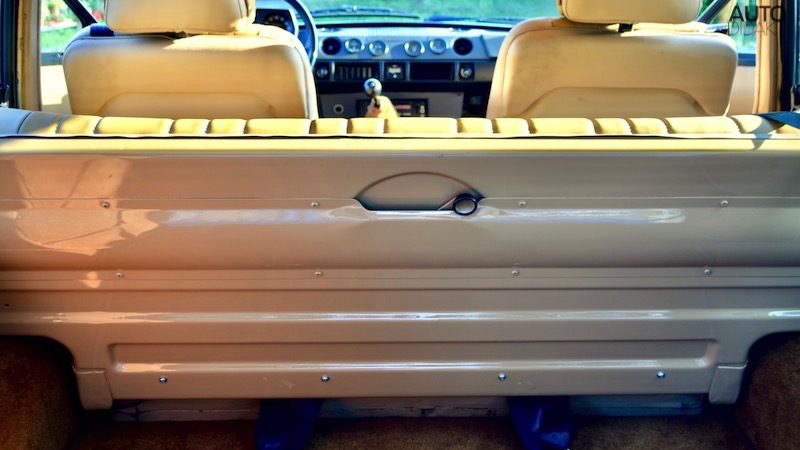 Of course, when vinyl became leather and plastic turned into wood, the Range Rover lost the purity and much of the elegance that made the first examples of the breed such object lessons in industrial design. Fitness for purpose gave way to luxury, coherence to opulence.

Rather than being ‘the first SUV’, the Range Rover can lay claim to being the first cultured utility vehicle. Its unique, eventually iconic appearance lent the 4x4 a sophistication that has not been superseded since. For all the creature comforts, lushness and glitz its successors and indirect epigones might have gained fail to match what was achieved by Bashford, King and Bache with the first Range Rover. Sumptuousness is no substitute for class.

Perfect description of a - still - perfect car.
The first Range Rover so much reflects a certain "Britishness" which is far away from what on the continent is seen as typically British, wood, leather, West-of-England cloth and a certain traditional appearance.

Its design reflects a modernity and faith in the future as did the Concorde, the Hoovercrafts, the Barbican Centre and the Harrier.
And you found this appeal in the Rover 2000 TC as well as in the Rover SD1 and the early XJS.
Sad enough, this modernity was competly lost during the eighties of Mrs. Thatcher...

Absolutely. In that context, isn't it fascinating to realise that modernist stylists such as David Bache, Harris Mann & William Towns became marginalised once the 'conservative revolution' had truly taken hold of the UK?

The 'pipes & slippers' cliché also happens to be one of the more significant reasons behind Jaguar's troubles, in that it prevented the brand from evolving for far too long. The Range Rover, on the other hand, was always considered inherently modern enough for it not to turn into a caricature of itself.

Interestingly, the Blair years, despite acting as a respite from Thatcherism, didn't ever result in a truly original, prescient aesthetic concept (the failed Millennium Dome and a few other examples excepted). Most of 'cool Britannia' was decidedly nostalgic and retrospective, with a dash of postmodernism thrown in. If there was an architectural equivalent to that state of mind, it would have to be the works of Terry Farrell, which I find just as unbearable as the creations of our own O M Ungers.

I totally agree with you, the Blair years were a time no real progress in combination with a lack of visions, from the social point of view as well as from the aesthetical point of view and "Cool Britannia" was just a kind of marketing tool.
At all, the problem with Tony Blair was that he had to buy all his furniture...

The postmodernism in Great Britain has to be seen as a contramotion to the engineers architecture of Foster and Rogers as well as the minimalistic architecture of the younger Chipperfield, Pawson et al. and, from my point of view, finds its analogy in design in the Jaguar X350, which had no longer to do anything with the classic XJ S. I-III, XJ 40 and X300/308 but tried to echo the design in a rather unelegant manner despite the modern underpinnings, making it Farrells SIS building on wheels...

But also here in Germany we lost the spirit of sophisticated design for which our country was so famous, when the HfG Ulm - and later the HfbK Hamburg - were schools where students were trained by people like Otl Aicher or Dieter Rams, not only the white Carreras with Fuchs wheels and without any chrome were breathing the spirit of a modernism after the Bauhaus, also the first Baby-Benz, the 190 E, the BMW e34 and e32 were designs of a functional cleanness which has not been reached since, espcially when you compare them to the actual equivalents.

So this lack of visions is more or less not a specific national problem, I suppose.