IAA 2017: Hopefully The Future (Do Not Go Gentle Into That Good Night)

When looking outside of the mainstream, inspiring car designs can still be unearthed at the Frankfurt Motor Show.

With the German Big Three in the a stranglehold of expired recipes and a latent fear of an insecure future, it’s up to the less established manufacturers to come up with stylistic solutions that convey a genuine sense of creativity and, in certain cases, even progress.

It is obvious that past success has become quite a burden for a great many marques. Which goes some way of explaining why it’s the supposed ‘lesser’ brands of the Volkswagen empire that currently boast the most convincing brand image and design.

Under the design leadership of Alejandro Mesonero-Romanos (the brand’s first Spanish chief designer, incidentally), Seat has come closest to developing a convincing identity of its own since the company’s inception. Comparing the lacklustre VW T-Roc to its Seat Arona sibling vividly illustrates the current spring in the Spaniards’ step. Even more impressive than this has been the ascent of Škoda though, which has steadily established itself as the most sophisticated non-‘premium’ brand in town. 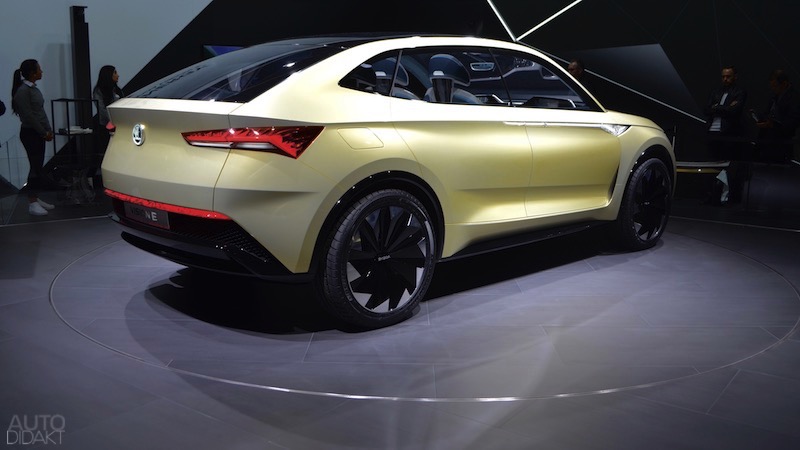 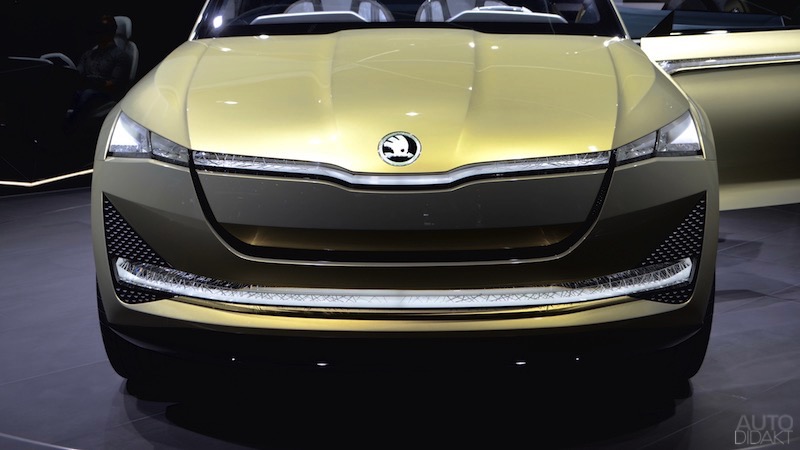 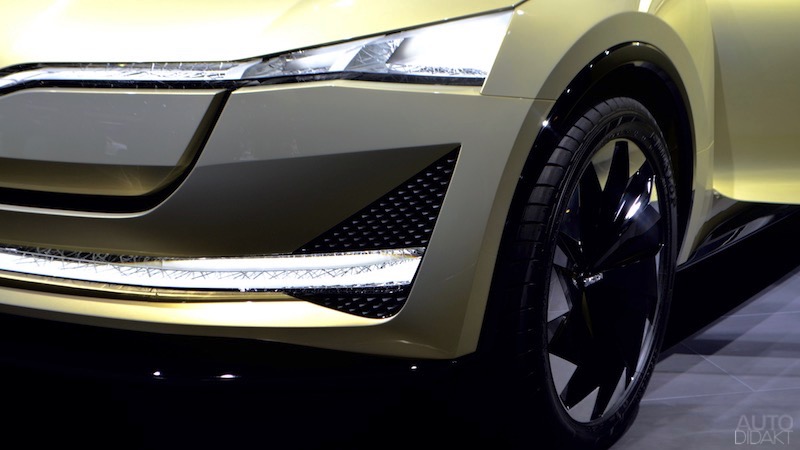 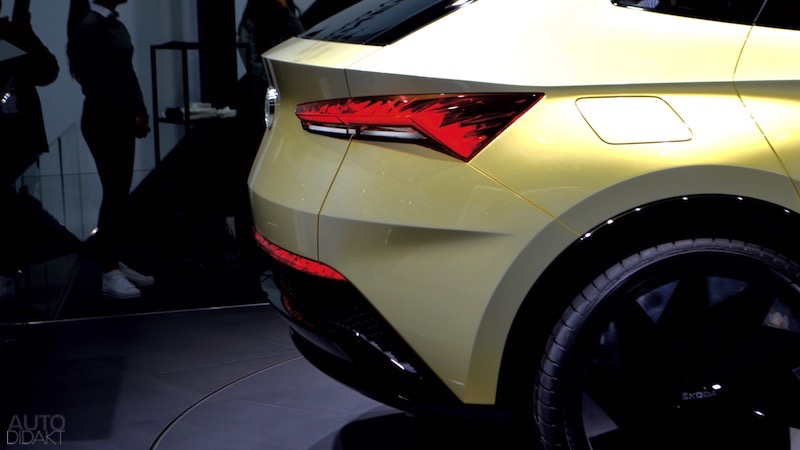 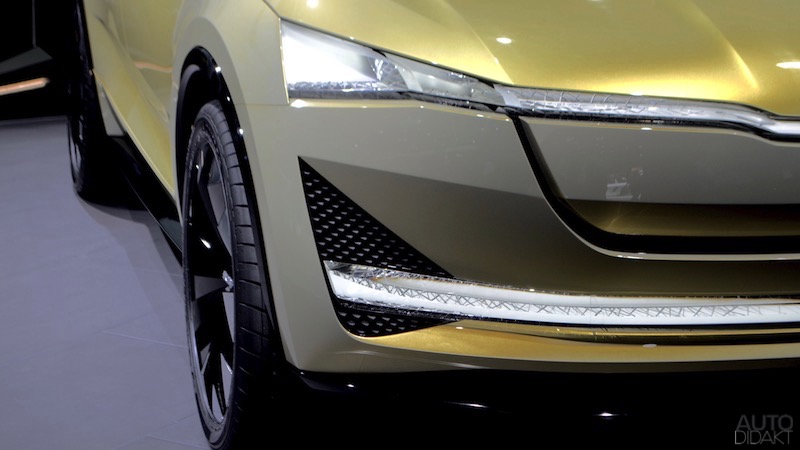 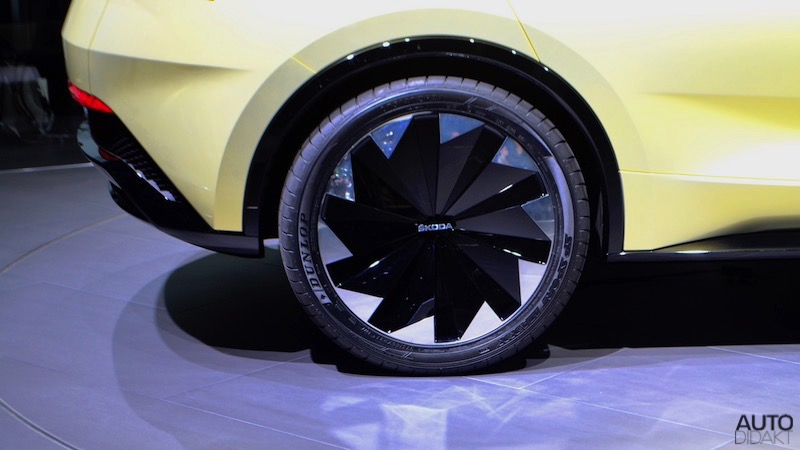 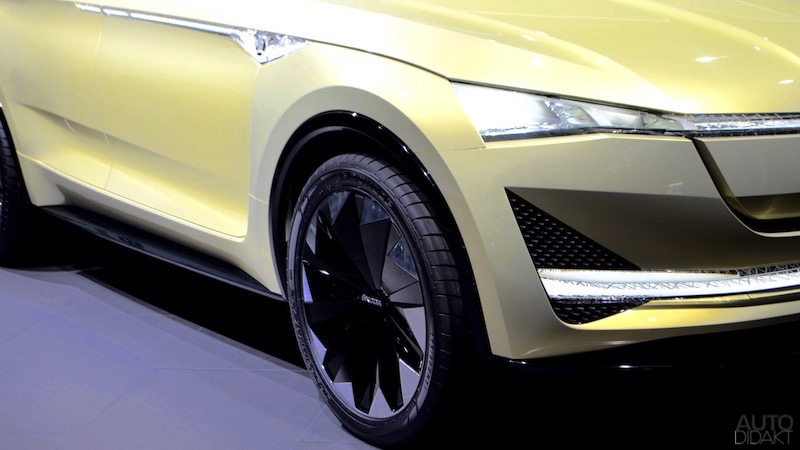 Since Jozef Kabaň was put in charge of the Czech marque’s design in 2008, Škoda has attained a level of design quality that at least matches, or, in certain cases, exceeds that of its supposedly superior sibling brands. As Kabaň has since been poached by BMW, it appears appropriate to view the Škoda Vision E as a parting gift of sorts to the Czechs.

If there’s an element of the Vision E that’s to be criticised though, it’s got to be its bodystyle. The electric fastback SUV format has rather quickly evolved into a bit of a lazy code for non-alienating/challenging electric concept cars. It’s therefore slightly regrettable that Škoda have chosen this shape for what is otherwise by far the finest concept car effort to be presented at VAG’s hall 3.

Taking the ‘Bohemian crystal’ theme that has served the Škoda Superb so well - even in production form - even further, the Vision E does exactly what a good concept car ought to do: it takes the stylistic tropes and values of a brand and exaggerates them in a fashion that may border on, but never actually reaches excess.

In the Vision E’s case, the ‘Bohemian crystal’ detailing is therefore showcased on a large scale, in properly artisan fashion. As eloquently stated by Škoda’s chief exterior designer, Karl Neuhold, ‘light is the new chrome’. And although Škoda is hardly the only brand to employ light units as literal brightwork (see VW’s I.D. Crozz), the Czechs have actually done so in far more exquisite a style than most others.

Photographs certainly don’t do the Vision E’s fine slivers of intricately engraved crystal justice, which act as a delicate counterpoint to the body’s precise, but bold crystalline surfacing. Even the glass badges appear like artisan items, rather than forced gimmicks.

In keeping with Škoda’s brand values, the Vision E doesn’t overdo the flamboyance though. The crystal accents are the only unreservedly flamboyant elements of the car’s exterior. The sober wheel design and even the cleanly structured matrix details at the front skirt betray the fact that Škoda’s designers understand what their brand stands for - and similarly doesn’t stand for. Even in the case of an outré concept car. 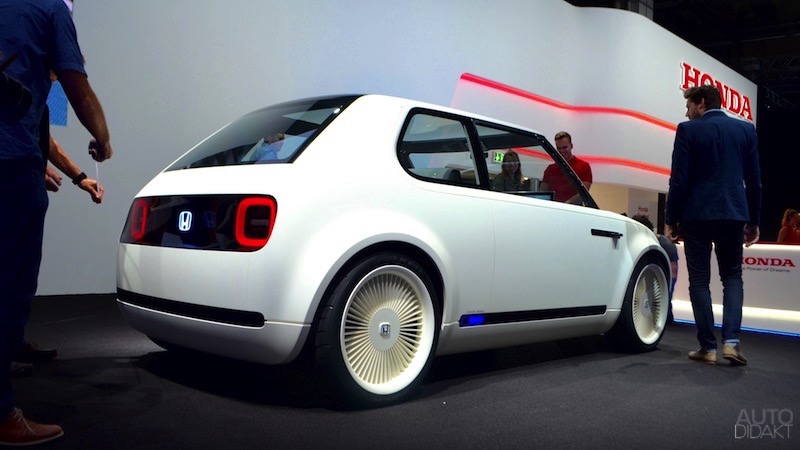 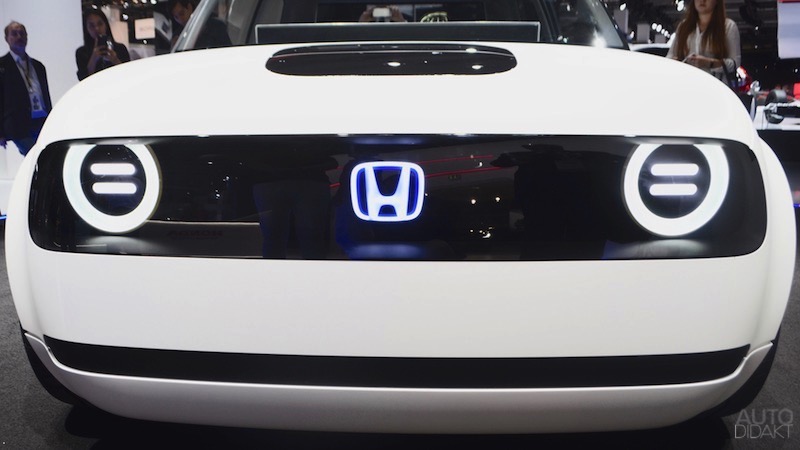 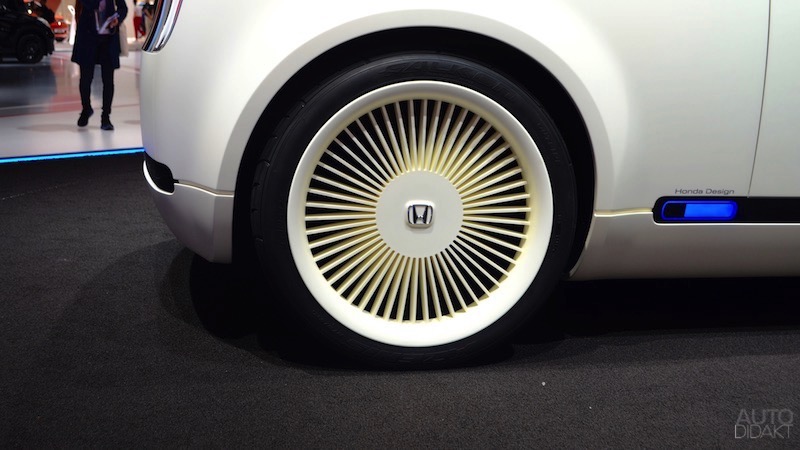 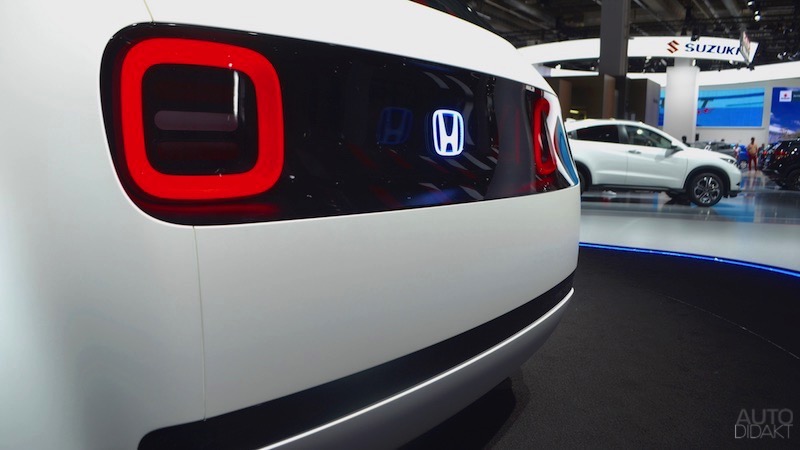 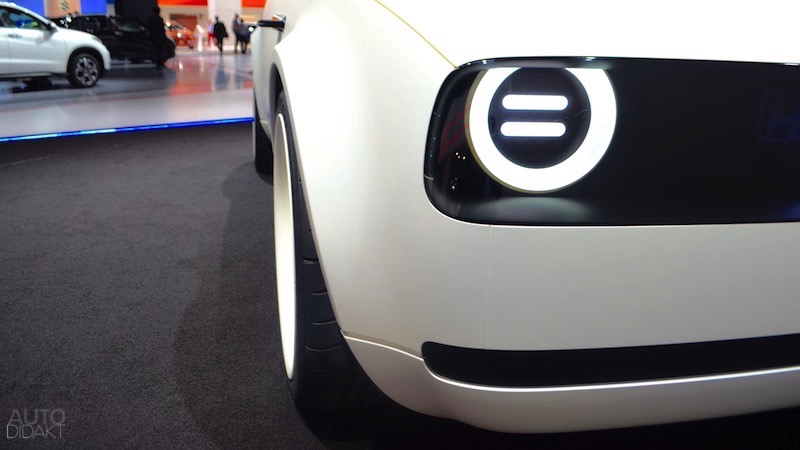 Almost the polar opposite of the Škoda, but similarly applaudable, is the Honda Urban EV Concept. Unlike the Vision E, the Honda bears no similarities to its brand’s current design themes - which, in the Honda’s case, must be a good thing, as highlighted by the simply puzzling shapes of the production Civics and CR-Vs standing next to it.

Employing a product design approach that’s somewhat reminiscent of VW’s (pre-facelift) Up compact car, but taken even further and augmented by more than a whiff of Kawaii, the Urban EV Concept is charming without being outright cute, and tongue-in-cheek in that way only the Japanese appear capable of pulling off. It’s two-box shape is admittedly not necessitated by its electric architecture and could therefore be accused of disingenuousness. But as a post-modern style statement that shows what shape fashion-driven urban mobility might take, it’s an unmitigated, good-natured success. This assessment also includes its interior, which takes some of the BMW i3’s ideas of exploiting the advantages of EV architecture to provide an uncluttered, airy, ‘authentic’ cabin ambience and adds some minimalism, even though the usual caveats regarding the excessive employment of touchscreens remain.

In stark contrast to Honda, Kia’s reputation has been on the rise over the past decade, particularly when styling is concerned. In recent years, the Korean brand has become one of the more prominent champions of the regrettable trend for aggressive frontal aspects, but that has done little to diminish the reputation of the Korean’s design department. Mind you, Kia has also become increasingly prone to employing fake air vents and grilles, which is an approach one would usually consider to be below someone of the stature of Kia design chief, Peter Schreyer. But even bearing these recent developments in mind, the quality of the Proceed concept car unveiled at the Frankfurt show remains beyond reproach. Some of its detailing may border on the overwrought, but in terms of proportions and surfacing, Kia could unquestionably teach the likes of Audi, BMW and VW a lesson these days. 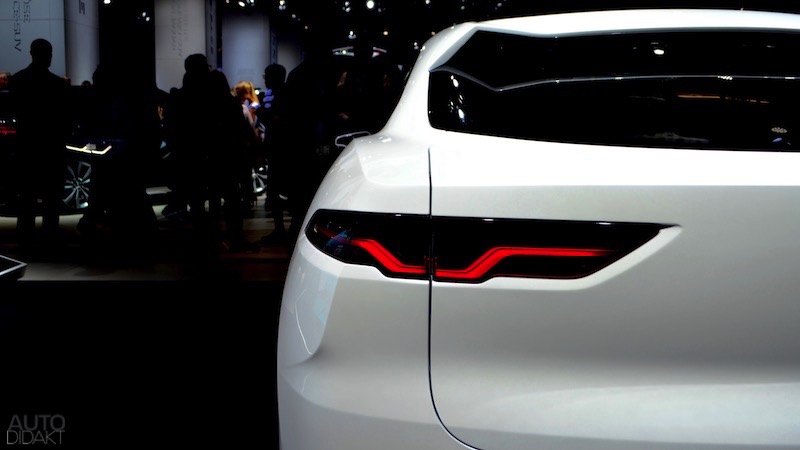 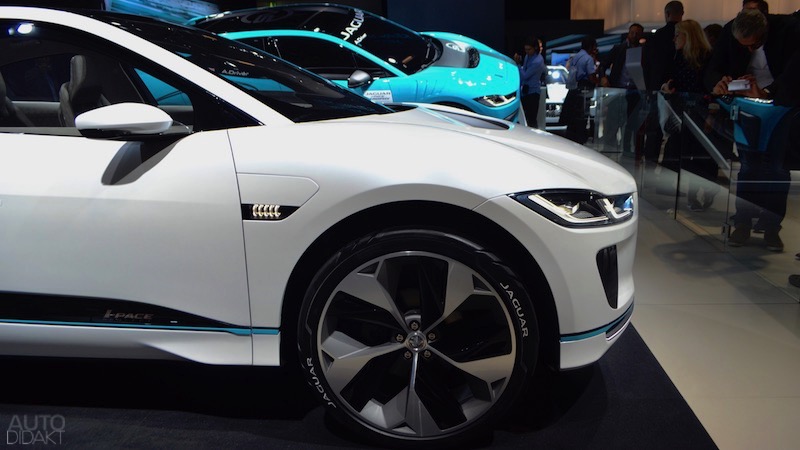 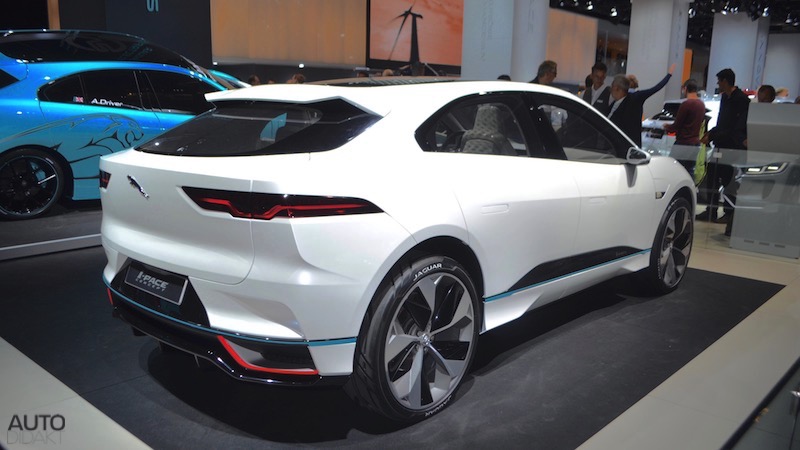 Despite being one of the quintessential design-driven brands, Jaguar’s recent production car offerings have hardly been show-stoppers (the E-pace SUV unveiled at Frankfurt being no exception). Happily, the electric I-pace concept car the marque brought along to the IAA is the most accomplished Jaguar in quite some time. Somewhat reminiscent of the outstanding 2003 R-D6 concept, I-pace achieves the feat of bestowing an architecture that wouldn’t usually suggest itself for a Jaguar with a flair that perfectly suits the storied marque.

Even in terms of bodystyle, the I-pace is refreshing. Instead of going for the token SUV fastback profile, the Jaguar’s shape is more along the lines of a slightly butch, but not inelegant large hatchback. This results in a very confident stance that doesn’t need to resort to blunt aggression to create an impact.

I-pace’s detailing is similarly assured, starting with the Range Rover Velar-like hidden doorhandles and ending with the distinctive lamp graphics. But the design's finest quality, apart from aforementioned proportions, has got to be the surfacing, which is simply exquisite. In keeping with Sir William Lyons’ ethos, which was all about soft, voluptuous surfaces needing defined, sharp lines to come into full effect, I-pace gains a dynamic, yet still sufficiently romantic flair through its expert handling of radii and creases. In this particular regard, it must be described as the best Jaguar effort since the original XJ went out of production in 1992. Ian Callum, Julian Thomson et al can be rightfully proud of this electrifying, assured statement car.

Of course, none of these concept cars is the game changer, the one automobile to reshape the automotive landscape. Yet this automotive landscape would unquestionably be a better - or, at the very least, more picturesque - place if more of the auto designs showcased at the IAA had striven for the same levels of sophistication and/or creativity as Škoda, Honda, Kia and Jaguar have. Or the exuberant optimism of the Borgward Isabella, for that matter.

These cars prove to the mainstream (or Main stream, if one felt the obligation to include a Frankfurt pun) that car design anno 2017 mustn’t be confined to the cul-de-sac of passive-aggressive conservatism. Creativity and intelligence still pay off.