The main business of Turin’s premier remaining carrozzeria may be beauty. Yet a look at its past betrays far more than that.

If one should never meet one’s heroes, one should arguably better not lay eyes onto one’s design benchmarks either. In the case of the Lancia Florida II, exposure to the actual car results in a minor case of deflating expectations. For the concept car that not only inspired the Lancia Flaminia Coupé, but also played a crucial role in heralding the dawn of Italian car design domination and acted as Battista ‘Pinin’ Farina’s private car, unquestionably delights with its clean, dignified beauty. But surprise it does not - quite the contrary, in fact, as its lines and certain details not only found their way onto the Lancia, but also the Peugeot 404 and a fair few others. Influence eventually comes at the price of impact.

It is not as though a visit to the Pininfarina museum is entirely without surprises though. For once one has made it past the manicured lawn of the company’s Grugliasco headquarters and into the main building (a brutalist International Style building that juxtaposes elegant, flat proportions with rough, copper-coloured concrete walls), the ‘museum’ turns out to be the entrance lobby - featuring no more than a dozen cars, plus two wooden styling bucks and some glass cabinets. Given its diminutive size, this museum better make up for its lack of quantity with quality exhibits.

Somewhat unexpectedly, the first of these exhibits welcoming the visitor are the unassuming Cambiano, the boldly lithe Sergio and the intriguingly sculptural H2 concept cars. These three designs are not Pininfarina’s most recent efforts, but act as a kind of tribute to previous Pininfarina chief designer, Fabio Filippini, who left the company two years ago. Even though none of these designs can boast historical value in the way a Florida II does, they still depict the stylistic values the carrozzeria ideally upholds: Elegance, simplicity and, above all else, good taste. That the Sergio marks the flamboyant end of this particular scale, while the Cambiano’s appearance is clean to the point of blandness helps illustrate this point rather vividly. 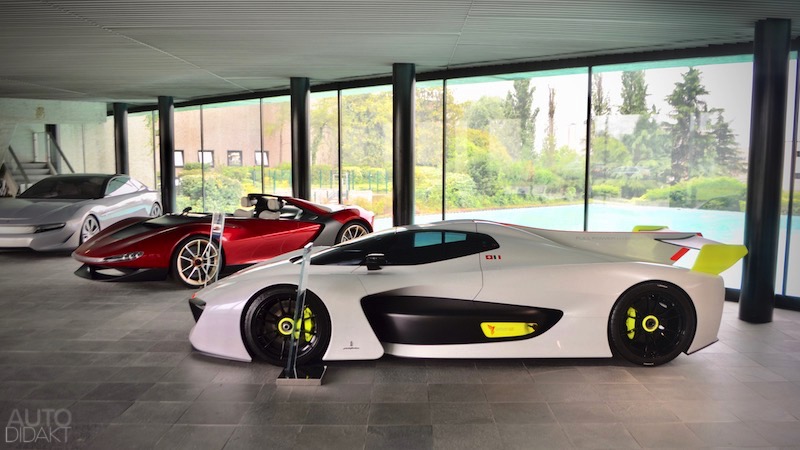 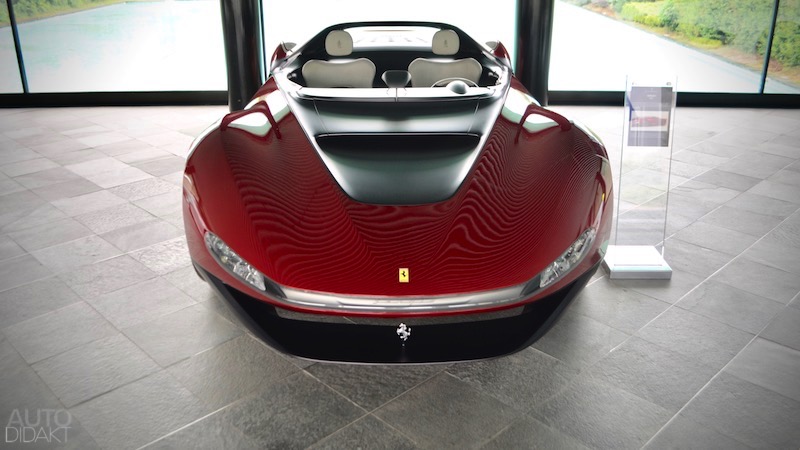 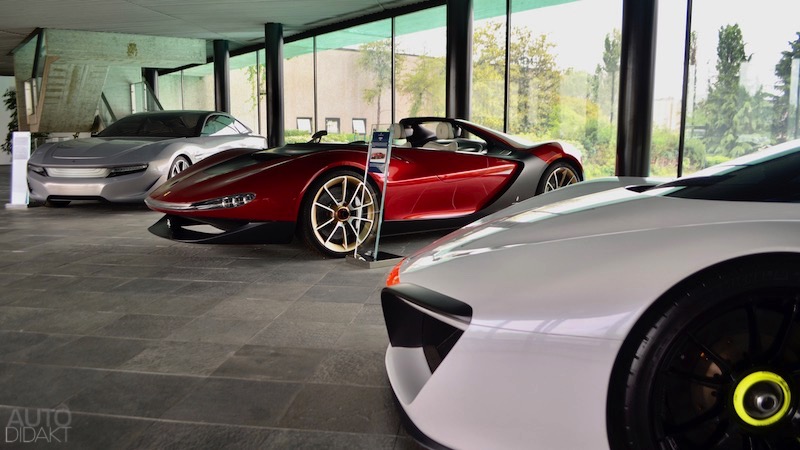 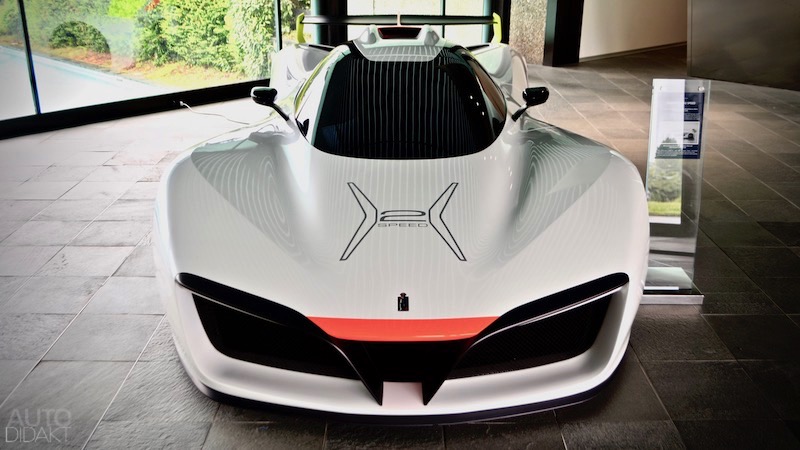 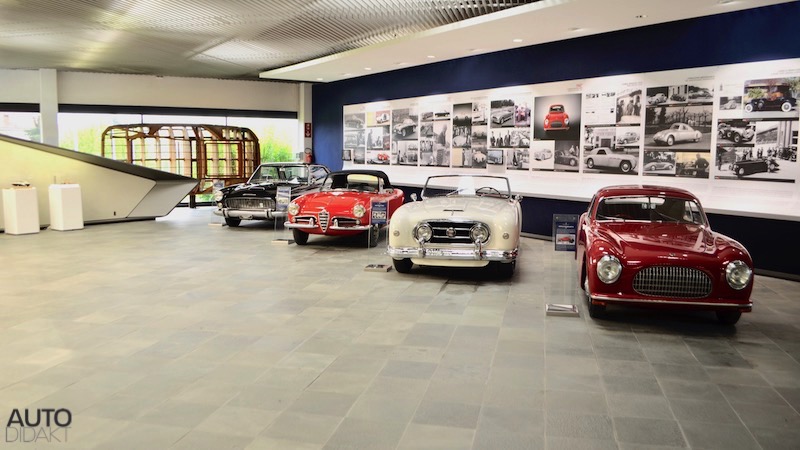 The rest of the cars on show comes as much less of a surprise. Obviously and inevitably, the Cisitalia 202 marks the start of an anti-clockwise (mostly) chronological tour of Pininfarina’s history, followed by a Nash-Healey that mainly highlights just how advanced the six years older Cisitalia was. An Alfa Romeo Giulietta Spider (Tipo 750) - a car not only designed, but also built by Pininfarina - signifies the beginning of Pininfarina’s business as a large-scale contract manufacturer, which resulted in more than four decades of successful operations, before the production branch’s downfall (owing to manufacturers increasingly taking niche model production in-house) almost killed Pininfarina altogether.

Parked right next to the Alfa, the aforementioned Lancia Florida II marks the break from the styling template set by the Cisitalia 202. Sheer, clean surfaces take over from voluptuous radii and romantic ornamentation. Chrome is still present in abundance, but the Florida II nevertheless heralded the age of modernist car design. It also disposed with the last remaining traces of pre-war car forms and established Italy as the major force in automotive styling - it therefore comes as no surprise that GM, hitherto worldwide car design trendsetters par excellence, would soon adapt the Florida II’s basic design into the sheer look championed by General Motors’ then-chief designer, William Mitchell. So even though its visual impact has been dulled, the Florida II’s meaning must not be underestimated.

Eleven years after the Florida II’s unveiling, this still basically held true, though Pininfarina had since gained formidable competition, courtesy of Bertone and ItalDesign, where Marcello Gandini and Giorgetto Giugiaro respectively rewrote the car design rulebook with origami shapes and wedge silhouettes. Pininfarina responded in typical fashion with a somewhat more restrained and (heavy rear aspect apart) elegant riposte in the shape of the Ferrari P6. A typical result of the collaboration of Pininfarina maestros, Aldo Brovarone and Leonardo Fioravanti, the P6’s most shocking element was its mid-engine layout, which had already been used by the competition, but was viewed with much scepticism by Il Commendatore, Enzo Ferrari. Despite the slightly jarring juxtaposition of a romantically curved, Dinoesque air inlet and starkly modernist louvres on the rear engine lid, the P6 could not match the contemporary Alfa Romeo Carabo or Bizzarini Manta for cutting-edge impact.

But then again, neither of these concept cars spawned a production version, which the P6 did. Moreover, the production car, first shown as Ferrari Berlinetta Boxer in 1971, ironed out the P6’s stylistic quirks, thus combining the aggression inherent in the wedge-shaped, mid-engined sports car layout with the kind of athletic elegance very few ever mastered with quite the same panache as Pininfarina in its prime.

Seeing the P6 and Berlinetta Boxer standing next to one another, it becomes abundantly clear that in this case, Brovarone, Fioravanti et al achieved the opposite of the industry norm: They took a no-holds-barred concept car design and turned it into a much prettier road car. Leaner, with a far more athletic a stance and more elaborate surfacing. 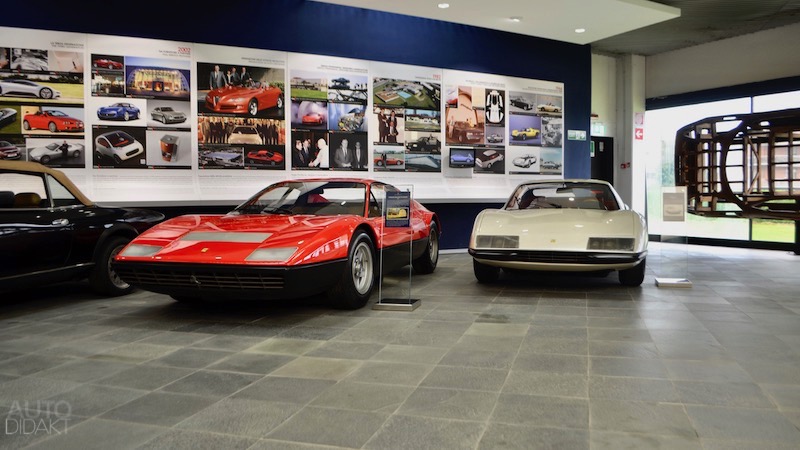 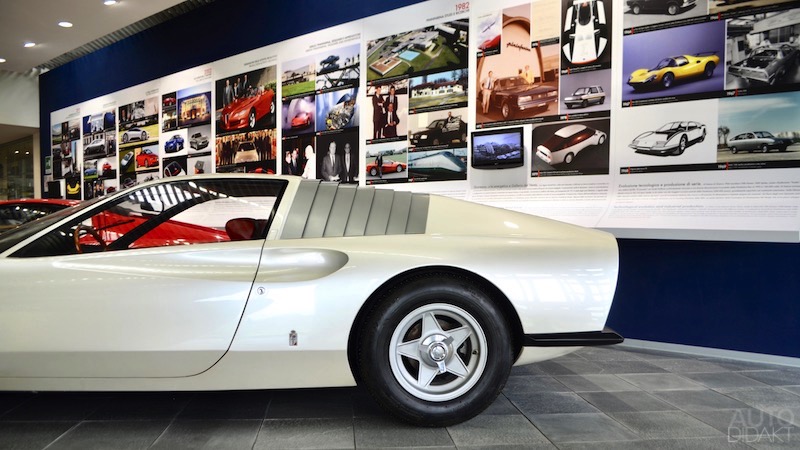 The Fiat 124 Sport Spider standing next to the Ferraris not only ends the chronological part of the exhibition (what with it having been unveiled in 1966), but once more highlights Pininfarina’s past success as a design studio and contract manufacturer. In this case it even entailed the sale of late models under the Pininfarina brand, once Fiat had decided to cease sales of the model and Pininfarina had taken over production. Unfortunately, these models, named Spider Azzura/Spidereuropa, all received rather heavy-handed facelifts by that point, thus diluting the original Tom Tjaarda design.

Right next to the Fiat in physical terms, but actually more than four decades removed is the Alfa Romeo Duettottanta (alternative marketing spelling: 2ttottanta), first shown in 2010, to great acclaim. It did not result in Alfa Romeo rekindling its relationship with Pininfarina, but has since gained fame as one of car design’s most recent wasted opportunities. Which would be a particularly enthusiastic view on a design that could alternatively be seen as pleasant, if maybe a bit wide and tall for its length. Or, if one was being rather uncharitable, unquestionably pretty, but also a tiny bit bland. 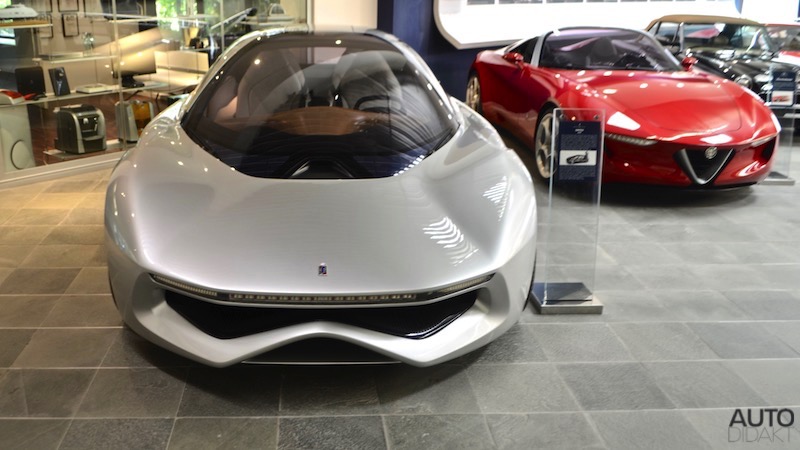 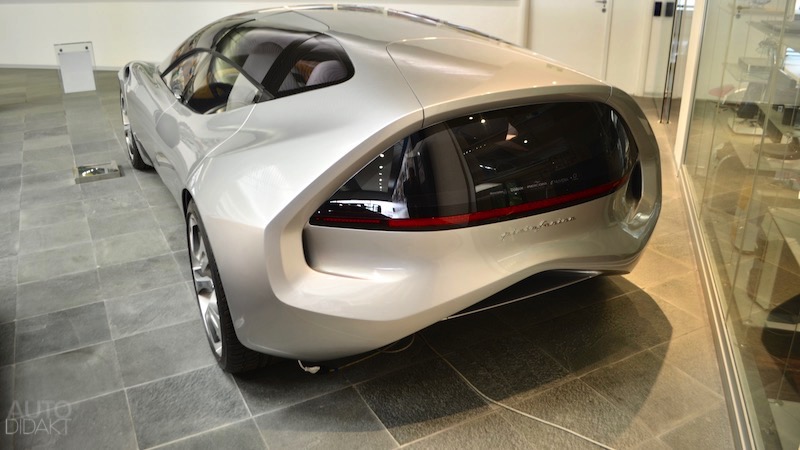 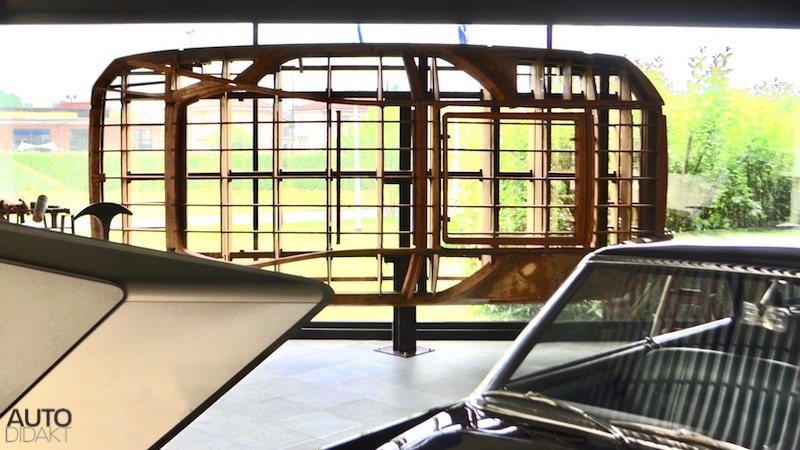 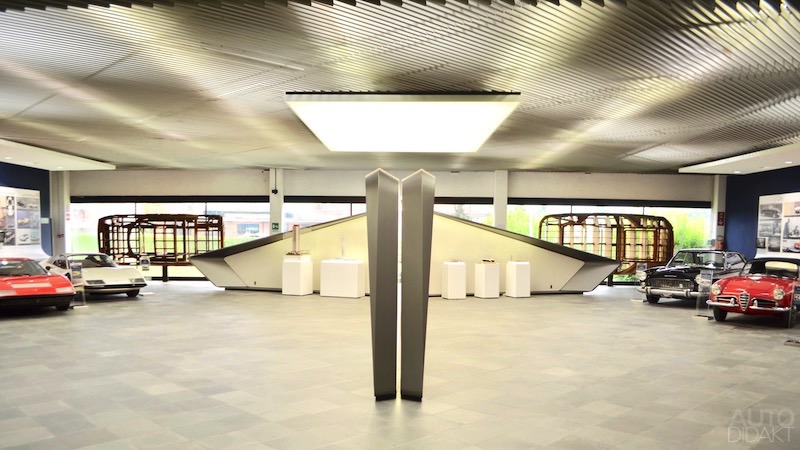 The same could not be said about the final car on show, the Sintesti. This design actually predated the Duettottanta by two years and was the introductory show car of then-new Pininfarina chief designer, Lowie Vermeersch. Intriguingly, it shares a few traits with the H2 show car in that both sport unusual proportions and do not photograph well. Both reward extensive examination of subtly exciting surfaces and intriguing packaging. In the Sintesi’s case, this means an architecture that is somewhat reminiscent of a lowered Jaguar i-Pace with a Kamm tail. Coupled with its far smaller dimensions than photos suggest, the Sintesi makes for a striking subject that would raise eyebrows if presented at a motor show even more than a decade after it was shown for the first time - it simply has not aged a second since.

Car designs like the Sintesi’s or H2’s prove what Pininfarina is still capable of. At the same time, calling a handful of cars in an entrance lobby a museum also illustrates that, despite more than a decade of turmoil and trouble, the proud carrozzeria has not lost its sense of grandeur and self-importance. Which would make this disappointing, surprising, peculiar, thought-provoking place the perfect representation of a complex company that shaped car design like few others.

Hello, Christopher, and thank you for your virtual guided tour round the Pininfarina museum. I must say I am a little surprised at the limited and rather eclectic choice of Pininfarina designs on display, given the company's large back-catalogue of excellent designs. I have to confess that I am far more fascinated by influential designs like the Florida II than some of the supercar flights of fancy on display. Perhaps this reflects a limited perception on my part:I fund it difficult to see the "trickle down" influence of such cars on production models. I'm also more interested in how designers incorporate the practical requirements of everyday cars in a distinctive and aesthetically pleasing design. I suspect this is rather more challenging than designing a supercar!

The Florida II influenced a very wide range of production cars, including the humble Austin A40 Farina, a strikingly modern looking design in 1959. In Mk2 form, it could even claim to be the first B-segment hatchback. Had it been launched with the Mini's FWD mechanical package (and proportions altered to suit) that really would have been revolutionary. Unfortunately, it was saddled with ancient RWD hardware and was swiftly eclipsed by the Mini and 1100. The latter was a pleasant design, but I was always puzzled why they didn't make it 150mm taller to maximise the space within the footprint. Had they done so, and added a hatchback, BMC would have anticipated the Golf by more than a decade.

The Florida II was the car I was by far most looking forward to seeing in the metal. And yes, in terms of relevance, only the Cisitialia can hope to keep up with it. But the immediate impact of the car itself is somewhat dulled by the fact that its shapes became rather ubiquitous later on. If I had to save any single one of these cars in case of a fire at PF's headquarters, the Florida II would be my choice. My breath wasn't as taken away any its sight as I'd imagined though.

Like you, I found the selection of cars on display somewhat scattershot. On top of that, this place is more of a historical showroom than a museum - it doesn't even take a comparison with FCA Heritage Hub to illustrate that a dozen cars doth not an impressive museum taketh.